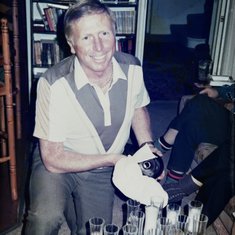 In loving memory of Barry Jordan who sadly passed away on 1st November 2021.

Dad grew up in Perry Bar in the suburbs of north Birmingham. His family had a holiday home in Borth and Dad spent a lot of his time and summer holidays there, which I think is where the fondness for Borth came from, because obviously later in life he made it his home and also made his living there from owning a couple of businesses. One of them was the cliff haven hotel, which again in its hayday was quite a popular venue for both visitors, dining and evening functions. He was very popular character and active in the community. Cyril can remember the many good nights like casino nights and ladies nights there over the years and they were always very popular and this was very much Dad. He was very much a social animal in the sense - he was always up for a bit of a night out or party and was often the last one wanting to go home. He did enjoy socialising. Barry was very generous - one year Barry won a trip on Concord for four people to Lapland which he invited Stuart and Frances. They had a great time, crossing the arctic circle ceremony, sleigh rides, a day of thrills and partying, Barry enjoyed a good party always in a quiet way.

As a young man he was a potentially promising footballer with a trial for Aston Villa until one day he fell through his parents flat roof whilst decorating the house and injured his leg, which put an end to it and he still suffered with that injury in later life that he had, which was unfortunate.

As far as we know his first job was working for his uncle on the wholesale fish market in Digbeth Birmingham, which he was very good at. Also, at one time he had an equity card and he had a walking part in one of the TV soaps of the sort of 60s which was called crossroads.

Cars were a huge part of Dad's working life - he worked for some of the really big operators, selling some of the top marks of cars like Rolls Royce, Bentleys and Jags and was very successful. He was sales manager in Halesowen for Heron carsales before he then moved on to Northfield, Birmingham to dispose of lease cars for Heron, which was called Herondrive. Dad was then promoted to the main disposal site in Wembley as head of Herondrive disposals. He had a flat share there but commuted weekends back to Borth. He also set up his own company called Jordandrive doing vehicle disposal. Over thirty years, he sold Stuart what must have been 5/6000 vehicles most of which in the later years were from Wembley, London.

Dad lived in Halesowen area, and then moved to his family/holiday home town of Borth on the Welsh coast commuting to London in the week (for his role as head of Herondrive disposals mentioned above) and returning to Borth at weekends. At Borth, Dad renovated the cliff haven hotel and bought a lovely bungalow with beautiful views over Borth beach.

Dad met my Mum when she visited friends in Wales. Dad then moved down to Bournemouth where I was born and he stayed in Christchurch for the rest of his life after separating with Mum. Dad and I used to travel together most weekends where he would drive me from one tennis tournament to the next. One of the tennis highlights every year was going up to play at Edgbaston for the week where we would stay with Sal and Hugh and we would have a wonderful week. Stuart would come down to watch me too and was always a nice way for all of them to catch-up. Dad was so proud of my tennis ability and I would like to think the absolute highlight for him, as well as me, was playing at Wimbledon in an event called Road to Wimbledon.

He loved sports generally, especially football, tennis and cricket. He had a season ticket for AFC Bournemouth and was a big fan. He would watch sports a lot on TV and used to go to the pub called the Stourvale in Christchurch to catch up with friends and watch sports too.

Everybody felt this about Dad:
• He was such a kind, caring, loving and very generous character. He was amazing with animals too.
• If you didn’t get along with Barry, it was you who had the problem.
• He was a larger-than-life character and very generous.
• He was a very well-respected, fair and popular man.

What a cousin to have. We had loads of fun down at Borth. no wonder we both love it so much. Bye Barry. Great memories.

What a cousin to have. We did have fun, lots of it and I will have many happy memories of the time we spent at Borth.

With fond memories of a good friend Barry

Missing your company and friendship at AFC.

Condolences to all of Barry's family. Henry and Margaret

Dad, you truly meant and will always mean the world to me. Never forget how you were always in my thoughts and how much I loved you. Thank you for everything you did for me in my life; how much you sacrificed to make me the person I am today and just ultimately thank you for your unconditional love. I hope you are proud of me and that I will continue to make you proud. I was very lucky to be able to call you my Dad and have you in my life, even if it was shorter than I expected. I’m just sad we didn’t get to make more memories, but I will cherish the ones we did make. I’m ultimately relieved you are out of pain. Love you forever and I’ll try to make you proud of me everyday xxx 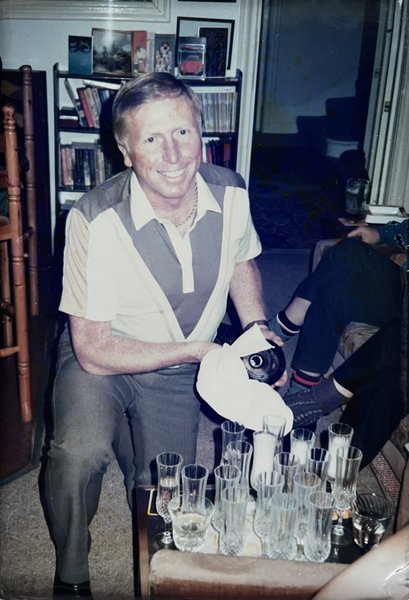