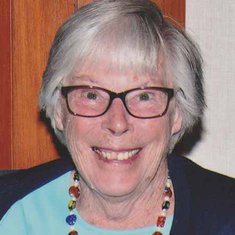 Donate in memory of
BrendaBlackfriars Settlement

She leaves the world a better place


Born in 1934, in a mill and workhouse district of Yorkshire's second largest city, the family moved to Poole, Dorset when Brenda was a child. A distant part of the family owned much of Chaddesley Glen at Sandbanks, so Brenda and her parents were able to move into a house on the Estate, with cousins, aunts and uncles nearby. A family home very different to the one the Bradford Goldsboroughs had left behind.

Brenda, an only child, loved the outdoors and being 'out and about', helping her uncle Charlie in the garden, and gathering cockles from Poole Bay. One of her first 'great acts of survival', age 10, was falling off the cliffs at Canford Cliffs. It was 1944, war-time, and her father Jack, a manager of the local Co-op store, was said to be more furious about the lost of the weekly groceries beneath the waves than troubled by the threat to his daughter's very existence! Brenda never did learn to swim but learn to love the sea as a means of escape, first to Canada aged 22, and finally, aged 84, to Iceland. Even chemo-therapy wasn't going to have Brenda miss out on 'life's great adventure'.

Brenda attended school locally but left at 15 to start her nursing career in child care, finding work at Blandford Children’s Home as a trainee children’s nurse. And so begins a lifetime of service.

1952 TRAINEE NURSE (LONDON) | Brenda enrolled as a trainee nurse at the Whittington Hospital; where she made a number of life-long friends who stood together into their 80s. Brenda, the 'last man standing'.
Learning everything she could during the 12 hour shifts on the wards and in theatre (eyes, fascinating, brains exhausting) Brenda did very well in her exams, and would have received a silver buckle for her uniform. But such costly items went out with arrival of the National Health Service, so a family friend — a Ward Sister, and so proud of Brenda's achievements — gave her hers, received earlier in her career from Lady Mountbatten.

1954 TRAINEE MIDWIFE | Enrolled as a trainee midwife, and again did very well in the exams.

1956 CANADA | Brenda packed a large trunk, boarded a boat, and together with friends emigrated to Canada. Upon gaining her license to practise, Brenda join the “White Angel” service — nurses who ran small Red Cross hospitals in a vast, remote region of Northern Canada, known officially as the 'Un-organised Territory'. Brenda was anything but un-organised. Her patch was 400 square miles of forest, lakes and unsealed roads. In winter there were many accidents: chainsaws, canoes, lightening, bears, trapped and rolled vehicles. Also difficult births, especially for the First Nation families with whom Brenda developed such a bond. With many feet of snow all around, Brenda soon became quite a competent skier, and with snow drifts reaching over the doors and windows, at home and hospital, an adept user of a large shovel! Those distant childhood days in her Dorset garden an apprenticeship that now served her well. Days off were spent exploring and experiencing life in the Arctic Circle — like Yorkshire, but bigger, wilder :-) Brenda really did have the time of her life.

1960 HEALTH VISITOR | Now 26 and already with 10 years of experience, Brenda additionally trained as a health visitor, setting up a mobile clinic and then 'taking to the road' to serve communities across west London and Middlesex.

1962 ENGAGEMENT & MARRIAGE | Wisely acknowledging Brenda’s other great love, Derek proposed at the foot of the the Totem Pole in Virginia Water — a gift from the people of Canada to Her Majesty The Queen, 4 years earlier. Brenda and Derek married later that year at All Saints Church, Perristreete, Gravesend — where Brenda's parents were living at the time. The young newly-weds settled in Ashford, in London's western suburbs, buying a new house which was being built. It was an exciting time. Brenda was in her element, designing and organising the new home. She'd in fact always wanted to be a designer for Poole Pottery — and would be making, and bringing colour into the world, until her dying day. The honeymoon was in Whitstable, Kent, but at Brenda's request, and with Derek's knowing acceptance, partly spent working on home interiors :-)

Over the years, Brenda had been 'freelancing' as a private maternity nurse for 'the rich and famous' of north London, and that additional income coupled with budgeting acumen born of a Yorkshire upbringing meant she could put money on the table to buy the first home for her own growing family :-)

1964 FIRST CHILD | Brenda gave up work and Nigel was born later that year just before Christmas.

Brenda was a proud and very sociable mother. She was one of the organisers of the local baby-sitting group, which allowed parents to have a night off once in a while, alternated with having more of other people's children around! She taught 'Safety in the Home' and First Aid for the local Brownies, and helped with the Girl Guides. Later in life she'd be acknowledged for her lifelong contribution to the Mothers' Union.

HOSPITAL PLAY SPECIALIST | During this time Brenda co-founded the National Association for the Welfare of Children in Hospital (NAWCH) in London — pioneering therapeutic play on wards, and helping to draft the first syllabus for the Hospital Play Specialist course.

1976 NURSERY NURSE MATRON & TRAINER | With her own children now in their early teens, Brenda became deputy matron and then matron of the council’s local day nursery, and was involved in training nursery nurses; women she remained close to for the rest of her life.

A change in council policy saw Brenda leave Surrey County Council, set up a second home in central London, and join the paediatric department at Guy's Hospital. Another career highlight. She would return as a volunteer in Children's Outpatients only a year after suffering a serious stroke in 1996. Her exceptional, hard-won recovery would eventually see Brenda become the longest surviving person on the South London Stroke Register.

2001 RETIREMENT BUT NOT REALLY | While continuing to contribute to Stroke research, at King's College and elsewhere, Brenda retired from Guy's aged 66, to prioritise her own health and personal interests. She became involved with Southwark local charities; work for which she would be given a Civic Award in 2014, in addition to all the other Certificates, Badges of Honour and Formal Acknowledgements for her Service.

Brenda helped set up and run two Stroke Clubs, one for the Stroke Association in Bermondsey and then at Time & Talents in Rotherhithe, for 17 years, until age 83.

Also for more than 15 years — until the fight against bone cancer began to cramp her style in 2017 — Brenda was a school governor at Beormund School, the Special Educational Needs facility just 5 minutes from Guy's Hospital. At the time of her taking up the role, the school did not have a uniform, and most of the parents could not afford one. So Brenda set about raising the money required to kit out each and every pupil, to help the marginalised young people in her care have a sense of belonging.

COUNSELLOR | 'Along the way', Brenda had pursued her interest in mother and child mental health and trained as a counsellor.

SOUTHWARK CATHEDRAL | Brenda's 'adopted parish church' was always a favourite place; where along with Derek she helped fund the setting up and continuation of the Girl's Choir, as only the first or second such choir in the country at the time.

EPILOGUE
Brenda loved 'home' and abroad, flowers and gardens, travelling and meeting people, daily life and 'big occasions'. She was a very loyal, practical and useful-to-know friend, with many friendships of 50-plus years, including, at the heart of it all, her 59-year marriage to Derek. A full address book, friendships meant everything, and reached across time, distant, cultures and generations. It was quite some talent. First getting to know and being loved by the mothers, and then the daughters and sons. Many of whom will be representing their respective families at Brenda's funeral at Southwark Cathedral on 18 November 2021. Brenda would want to thank them all, for the shared memories including now this one last one.

Brenda really was equally 'at home' and adept in a hot-air balloon over the African bush at dawn as at a white tie banquet in the City, where she'd manage to impress those she met with her humility and common-sense (once again, read "Yorkshire upbringing"!)

iN LOVING MEMORY OF BRENDA WHO WILL BE SORELY MISSED. A SPECIAL LADY WHO HAD A LOT TO GIVE. RIP BRENDA.

Dave Lukes is attending the funeral and the reception

Keith & Christine Oliver is attending the funeral and the reception 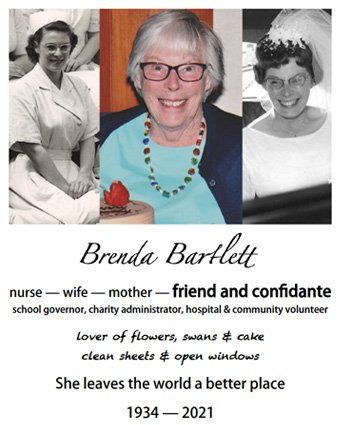 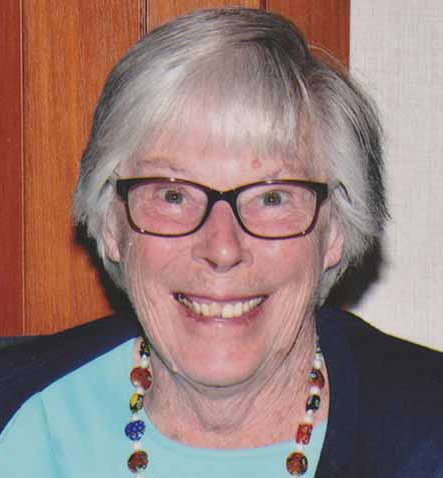