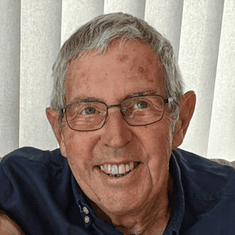 Donate in memory of
BrianWaterAid

From his early years Brian showed that he was going to plough his own furrow.

Spending his teenage years on a smallholding, isolated from his friends, he decided that this life was not for him and embarked on a degree course in Statistics at Brunnel in London. Here he developed his lifelong passion for film making, being able to visualise the end result of what he was trying to create and taking the necessary shots, using the camera to do a lot of the editing. His creative talents were given free rein in his vision for fitting film to music - long before it became accepted practice.

He considered a career with the BBC, but this was his hobby, so he followed his degree training and started work at English China Clays in St. Austell. Here, at our first jobs, Brian and I met.
We were married from there - 50 years ago - then moved to North Devon for a few years where he lectured in Statistics and Busines Studies, before moving south to take up a position with South West Water, where he stayed for the next 30 years to provide stability for the family.
However he didn't stay still. He undertook many roles at work, and became widely respected nationally, this being recognised by the award of his MBE, in 2004, for 'Services to the Water Industry' - the highlight of his working life.

He developed many interests outside work and had his finger in many pies, but he was also, at heart, a family man, and although an uncertain father at first, he was never happier than when surrounded by his family.

They remember his endless circular walks with the promise of an ice cream just around the corner that invariably never materialised. His impromptu ability to bring any conversation around to include sewage treatment and the uncanny ability to find them on any trip. More recently they remember their dad for his genuine interest in their lives both personal and professional and being there to provide advice, guidance and ultimately bail Rosie out! He was the king of procrastination for the mundane things in life; if he wasn't planning a holiday he would 'get to it drekley'.

When he felt they were all 'Launched' , he gave his enthusiasm free reign.
He left South West Water and set up his own business, taking his expertise out into the wider Water Industry where his skills with people and a lifetime of knowledge built him a reputation nationally as an expert in his field.

At this time he also embarked on exploring the world - a desire for travel that had been curtailled by his working life and which frightened me, but which he encouraged me on to enjoy and gave us both much pleasure. He had so much more to see.

Without his spirit of adventure my life would have been so much more narrow.
He was a trailblazer, with the vision to see where he wanted to be and how to get there - A man with a large personality who leaves a huge hole in my life.

My first contact with Brian was on the phone in 2006. He said 'Oh my Goodness here I am walking in the street of London, and getting a call from Denmark- and you speak good English.He made me laugh,and so many times more, we did not only talk about water conservation;but often about life, history philosophy. Thanks Brian foreverything. Nils and Iwill missyou

I remember Brian most of all for his laugh, and enthusiasm for water efficiency. Brian was always good for a giggle at the same time as getting the job done the right way, and taking the time to share his knowledge and encourage the people around him.
My sympathies and regards for his family.

Donated in Memory of Brian

A great Cornishman and a great loss to his family and the wider professional and social world. Its amazing how much more you find out about a person that you have known for several years, when they die.

As a fellow water efficiency professional, I've known Brian since the late 1990s. He always brought humour to often tedious proceedings with stories such as one of a transatlantic holiday during a hurricane season. A lovely man and a good friend to many, departed much too early.

I had the pleasure to work with Brian for many years and he was simply a lovely man and a good friend. He was one of the first people in the water sector to champion water efficiency and he made a significant national contribution to water conservation and the environment. Obviously he was an expert in his field, and widely respected, but he was always humble, charming, and went out of his way to help others. He will be sadly missed.

Brian always brought so much enthusiasm in training others in water efficiency. This is a fitting charity for all his dedication and hard work in the Water Industry. He will be missed. Rosie Rand

In memory of Brian. A great advocate for dancing in the South West. Duncan and Laura Brown

A proud Cornishman and a great Chairman of our Cornwall RSCDS Branch - we will miss you so much.

To a much missed great Cornishman

Brian's engaging manner and infectious laugh lifted the spirits on many a dance floor and elsewhere. Such a tonic! An untimely loss for all of us but devastating for Felicity, Rosie and all the family, to whom I send much love

Many lovely memories of Brian, his good humour, smile and sense of fun. We will all miss him.
Very much love to Felicity and the family.

We shall miss Brian’s humour and conversation he always had something interesting to say or a story to tell. He always made it clear how much love and pride he had in his family. Sending our deepest condolences to Felicity and all the family.

It's his rather unique laugh that I remember about Brian!

In memory of Brian; a great encourager and friend to so many.

I have so many memories of Brian's enthusiasm and drive in chairing the RSCDS Cornwall branch. I will remember his warm smile and infectious laugh. He will be greatly missed.

In memory of Brian Hooper

For so many happy dancing memories.

I felt privileged to have known you.
Sad that I won't see you again or enjoy your company.
Hugs to you and best wishes to your family looking forward to hugging Felicity.
Janet