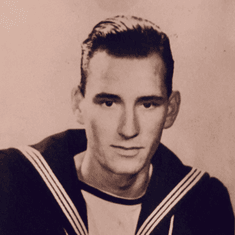 Donate in memory of
AubreyRowcroft Hospice

Aubrey passed away peacefully at the Mallands Care Home in Abbotskerswell on April 3, 2021, one week before his 101st birthday.

He was born on April 10, 1920 in Southsea, Portsmouth to Archibald Fielder a Royal Marine bandmaster and MaryJane Fielder, a ladies maid.  Tragically his father died of tuberculosis when Aubrey was 2 years old.  After the death of his father the family lived in Bournemouth and Southampton where Aubrey went to a number of schools.  His mother married Arthur Symonds when Aubrey was about 4 years old.  He always said the happiest times were in Ringwood where their lives were stable for 3 years. On his 14th birthday he simply left his desk and walked out of school.  He said he never listened to the teachers and used to daydream all day.  His first job was scrubbing the floor in a shop at 7s 6d a week.  He only lasted a week. Then he worked as a van boy, errand boy and finally as a delivery boy delivering shoes in the neighbourhood by bicycle.  At the age of 16 he enrolled in ‘Sea School’ for ten weeks of training for entry into the Merchant Service paid for by the shipping industry.  His first ships were the Baronessa and Athlone Castle as a Deck Boy in 1936 and the Queen Mary as a Boy Seaman in 1937.  During the Second World War he served on many petrol tankers and sailed all over the world.  He had harrowing stories of air attack and watching ships go down. One of his ships, the Scottish Chief was later lost with all hands. They were not allowed to stop and pick up survivors.  He also served on cable laying ships laying and repairing telegraph cables - one of these ships was called the Marie Louise, the name he gave, much later, to his sailing boat. During the war he rose from Ordinary Seaman to First Officer through self study and hard work to pass his Officer’s ‘tickets’.  He served until 1946 when he began his training for his teaching career.  He went back to sea briefly in 1956 for 3 months and was called back to lay submarine detection arrays in 1960 because of his experience on cable ships.

Aubrey graduated from the City of Worcester Training College and qualified as a teacher in August 1948. That year he began teaching History at  Exeter Episcopal School.  He had taught himself the mathematics necessary to be a competent navigator and never considered it very difficult.  In 1959 he was recommended to study mathematics at the University of Exeter to apply this gift in his teaching career. Math teachers were in short supply.  His career blossomed and he obtained a head of department position at Musters Road Secondary School in Nottingham.  This meant uprooting his family from the idyllic bucolic life on Dartmoor to go and live in a busy, dirty, polluted city.  Opportunity for the family came at a cost.  He taught in the same school until he applied for and was seconded to London University to study for a year to achieve his BSc in Mathematics.  He studied hard, coming home most weekends, and graduated in 1968.  Over the next ten years he taught as a lecturer in teacher training colleges in London, Trent University in Nottingham and Swansea University.  He took early retirement from his Senior Lectureship in 1979. He was 59.

After the family moved to Nottingham, he took them on a succession of amazing trips.  In 1964 we embarked on six weeks driving and camping all over Europe in a old airforce minibus.  A marvellous and life-changing experience.  Several van camping trips were made to Croatia. Then came the sailing holidays in the Marie Louise, an open 18ft motor sailing yacht.  Those culminated in an adventurous trip across the Channel from Southampton to Cherbourg and back.  Aubrey had nerve to spare and he needed it because more than once his passengers were praying, expecting the experience to be their last.  The last trip we did together was a hiking trip in the Pyrenees - we travelled there on his 1948 ES2 single-cylinder 500cc Norton with a sidecar attached. He terrorized the French population with his army surplus motorcycle gear.  He shared his passions with his family.

After retirement, traumatized by the death of his wife Nora to cancer, he threw himself into physical work which was his way of dealing with emotional pain. He completely renovated his home stripping it down to only the walls and rebuilding it.  He also began his love affair with Spain and bought property in Estapona on the Costa del Sol.  He embarked on a new career as an artist and became a prolific painter and entered several competitions.  He said he was completely content when painting - it calmed his restless spirit. When he wasn’t painting he was sailing in the Mediterranean in his beloved boat the Marie Louise. He made long trips alone from the Bay of Biscay to the Mediterranean and the southern coast of Spain.  Gradually he focused more on his painting and bought property in the UK to start an art gallery to sell his paintings and antiques.  He opened a gallery in Bath which he renovated single handedly in his late eighties but after a series of problems with break-ins he moved to Teignmouth and opened a new gallery.  He remained happily painting in Teignmouth until his stroke in 2016 at the age of 96.  After his stroke Aubrey was cared for by his widowed sister-in-law before he was taken into care at Mallands in Abbotskerswell.

Aubrey was predeceased by his wife Nora and son Brian, brothers Archibald and Peter.  He leaves his brother Gilbert, sons Roger and Peter, grandchildren Sam, Amy, Hannah, and Tim and four great-grandchildren, as well as many nieces and nephews.

I would like to thank all the staff, the Directors, and especially the manager Roz Wills, at the Mallands Care Home for their wonderful care of Aubrey.  My personal thank you to: my cousins Sue Madden, and Rob Ford; my friends John and Agnes Elliott in the UK; my dear friend Teri Haggart; and my family in Canada for their constant support.

A private service will be held in Torbay on April 29th.

In memory of my father and his amazing life.

In memory of uncle Aubrey who shall be sadly missed with our love from Mark, Janet, Thomas and James.

In memory of uncle Aubrey, you will be sadly missed with our love. Mark, Janet, Thomas and James.

In fond memories of Aubrey from his brother and sister-in-law with our love
Gilbert and Shirley.

In fond memories of Aubrey from his brother and sister-in-law with our love, Gilbert and Shirley.

Mr Aubrey, it was a pleasure meeting you and listening to your stories that sunny morning in Bath. Your painting "Trinity" brightens up my house every day, it is a privilege to have it remind me of a person with such a fascinating life.

Rob and Cath Ford donated £30 in memory of Aubrey

Goodbye Lofty. It was a privilege and pleasure to have known you.