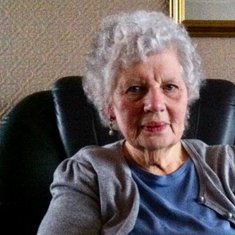 Dear nanny mill,
I have known you better than I have known my own grandmothers. You always welcomed me and others in your home with open arms and french fancies.

Once i asked you to show me how to knit. You demonstrated with the smallest needles and the thinnest whool, your hands were so fast. You could not explain it very well and i failed miserably. However you were very good at explaining that Mrs. Brown is played by a man.

Deepest sympathies to Ron and the family. 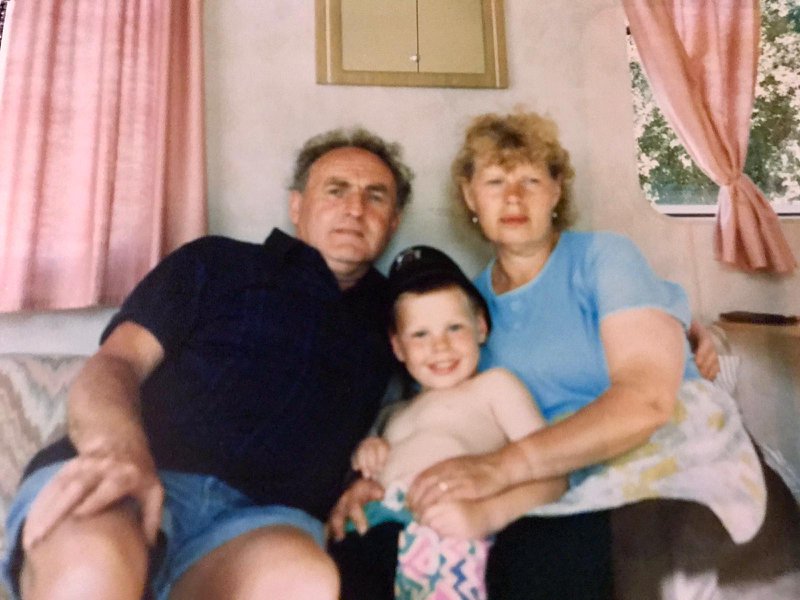 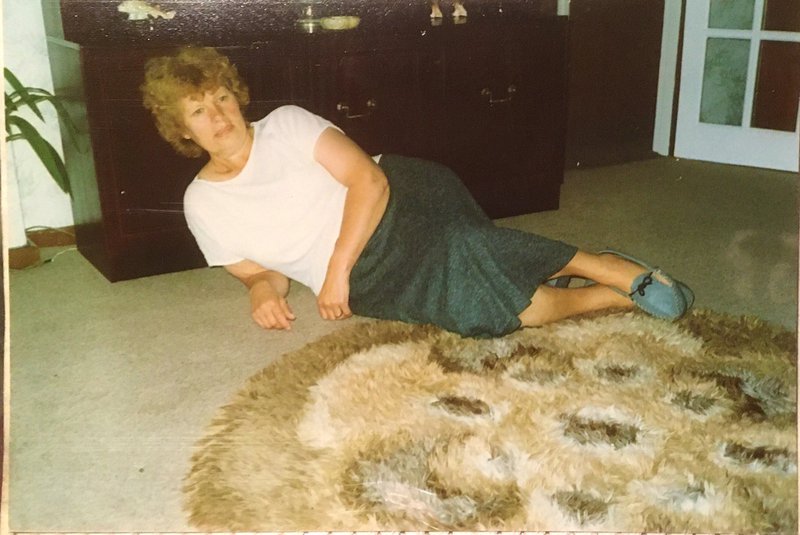 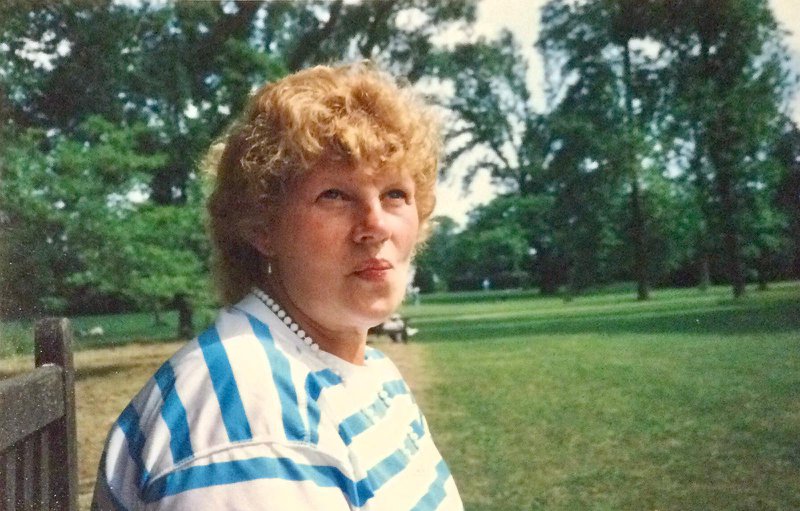 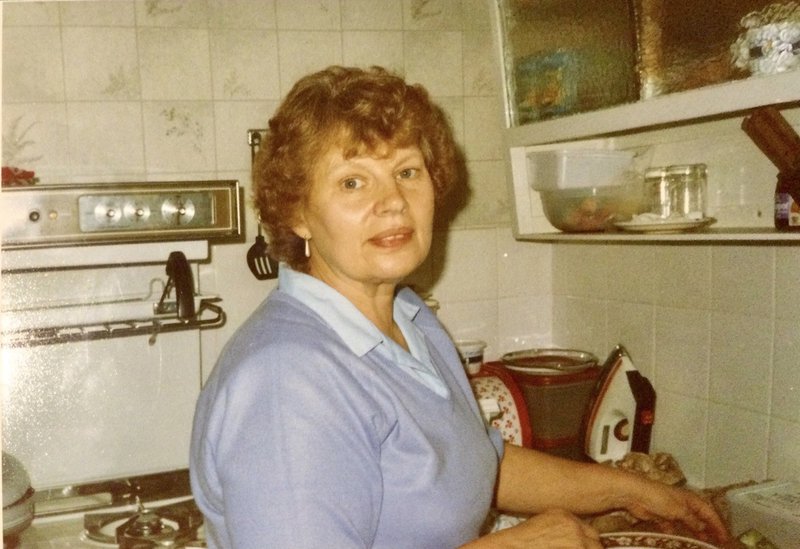 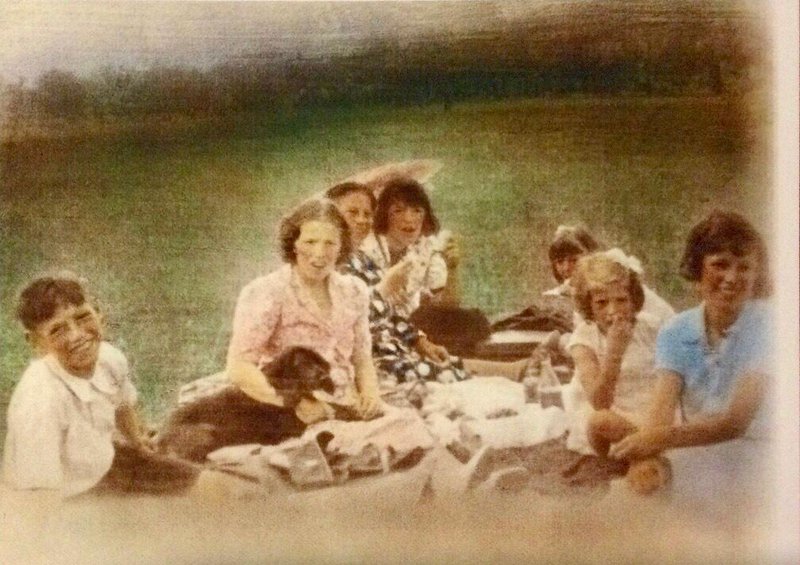 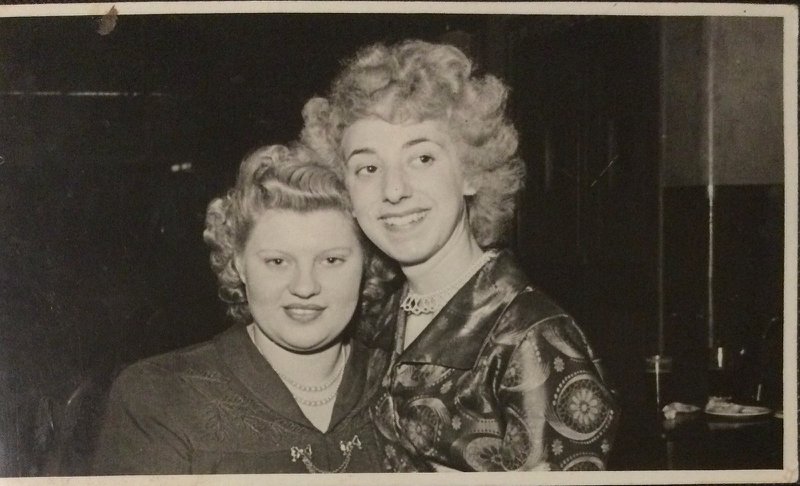 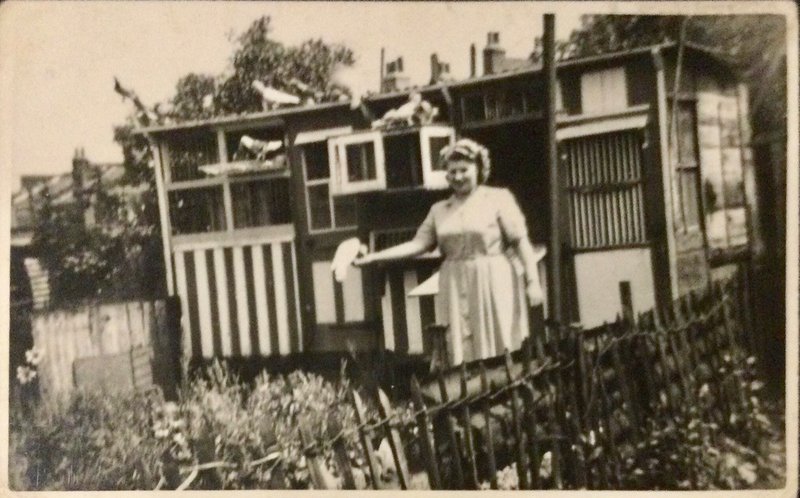 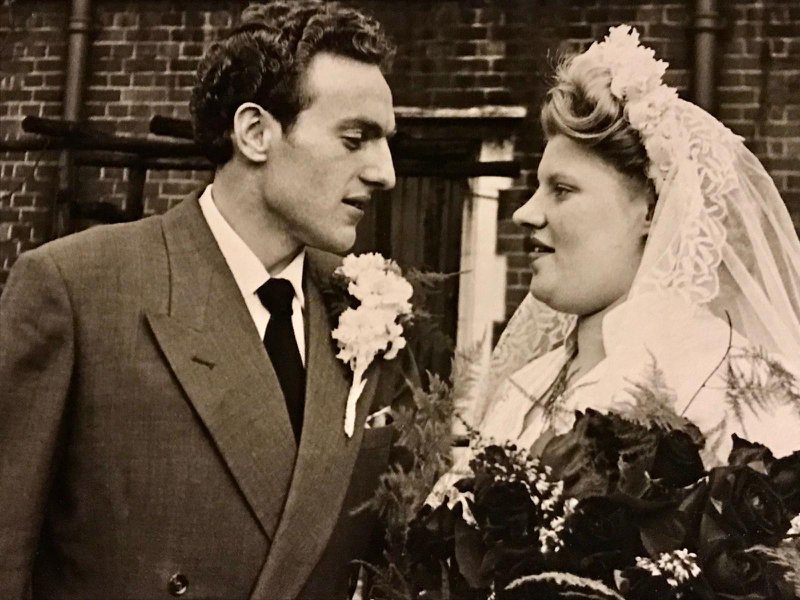 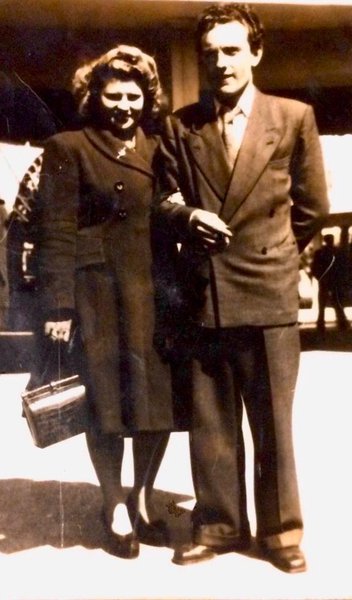 The one consistent was the energy that she would bring and would be happy to sit and play games and have a natter for hours. She would fill you in on all the family gossip, who had said what and what everybody was up to. Going into the most extreme detail with the odd shout to grandad to confirm the detail “bob, did she call on monday or tuesday?”

Another source of nans information came from her involvement with the neighbourhood watch (which basically meant that she liked to watch her neighbours through her windows, came to her own conclusions about what they were doing and then passed on this information onto whoever was sat next to her on the couch).
All in all it was very informative and very entertaining, plus she always bought/had with her a big bag of coconut cakes and a slab of bread pudding so it was never a hardship to sit and listen.

The only downside to visiting them for too long was the fact that nan was a bit of a feeder and the longer you sat there, the greater the calories you got. Even in a quick 30 minute visit you were bombarded with sandwiches, crisps, cakes, biscuits followed by jelly and icecream with possibly the odd sweet thrown in for good measure.
This made it all the more funnier as it was guaranteed on the next time you visited, the first thing that nan mentioned was the fact that you had got a bit fat and gained weight!

This in my mind was one of nan's greatest characteristics, that no matter who you were, she would always tell you what was on her mind and what she exactly thought of you.

Nan and Grandad were highly regarded in their community and were always being visitFrom an early age it was clear that nan would be ever present and an important person in my life.

We were lucky to see nan and grandad at least once a week, whether they would come to spend the day with us at the weekend, sitting in the garden playing games or from one of countless day trips out to various farms, parks, zoos, gardens or museums.

ed by their neighbours, bringing gifts and food and nan would love nothing more than being constantly told how beautiful her house and their garden was and how clean and well maintained it was.
On the flip side to this was, if one of their neighbors did not send a christmas card, then they would be quickly struck from favour and they had to make it up to her.


Nan also liked to take a visit down memory lane and alway kept a photo album or two in the drawer under her chair with others close by in a cupboard.
She was extremely proud of her weight watchers achievement back in 1973 when she lost almost half her body weight and loved to show the before and after photos, along with the newspaper clipping.

Even though we had seen most of the photos many times over she loved to look at them and remember the stories that each picture inspired.
This usually culminated with nan crying in fits of laughter that was infectious to everyone else in the room.

Words can't describe the loss that I feel with her passing.
At least she and grandad are together again which brings a little comfort.

I Love you Nan, Always and forever in my thoughts and in my heart.

Growing up Nan was always like a 2nd mum to me, I spent a lot of time at my nan and grandads house.

I have several fond memories of her, whether it was listening to karaoke songs on the CD player and us both singing and dancing along to them whilst reading the words from the little booklet inside, or me dressing up with an old blanket as a cape and a saucepan on my head as a crown. Then there would be the games of snooker we would play together. Nan wasn’t the best player but she would give it a good go, but you would have to be on constant alert as balls would often shoot off the table when she got into it a bit to much.

Then there was family holidays which were always entertaining. I remember 1 caravan holiday a bird flew into our caravan and nan caught the little bird for my grandad who collected birds, and we took it home with us and grandad put it in he’s aviary.

As I got older and started work, I still enjoyed going round to have dinner with nan and grandads. It was always a lovely dinner followed by a pudding and maybe a couple of slices of cheese on toast later on washed down by a few rum and cokes. She was known to be a feeder! Then when it was time for me to leave, she would
always slip me a rolled up note as if she was doing a dodgy deal, “theres your treat” she would always say. This continued even when I became a father myself! She was always so generous!

Nan was always such a happy lady. She loved a little tipple at Christmas, usually a Sherry or a baileys. You always knew when she was getting a bit merry because her cheeks started to get abit rosey, the smile would get bigger, then the dancing began ‘knees up mother brown’ and the legs would start going and she would start to swish her skirt about.

Nan always loved children and when I had a family of my own she loved spending time with them and had an electronic picture frame of the kids showing them as they were growing up. She always loved a cuddle especially as babies. She loved to bend Becki’s ear about the latest shenanigans within the neighbourhood!Nan sure did love a good gossip.....or passing on information, we never quite understood how she found out so much from just looking out the front window! Both Nan and Grandad welcomed Becki and all of her family with open arms and she always had stories to tell them about her family and they all enjoyed putting the world to rights when they got together, with a few choice words thrown in here & there! There was always laughter whenever she was around!

Nan will leave a massive hole in my life and the lives of so many who knew her.
I will always cherish all the memories I have of the time we spent together. Sleep tight Nan, I love you lots! xxxxx

Dear Millie, from the very first day that I met you, I knew that you were a woman after my own heart. You knew how to have a right ol' giggle and your abundance of gossip always kept me entertained!
You welcomed me and my family into your home with open, loving arms and your generosity and kindness was always much appreciated.
We have some brilliant memories from our many family gatherings and you loved my children like they were your own.
You made such a big impact in all of the lives that were lucky enough to know you, and you shall forever be in all of our hearts.
It's been very painful not being able to see you as much as what we would have done (blasted Covid) but it's very heart-warming and a great comfort knowing that you are now reunited with your beloved Bob.
Sweet Dreams Nanny Millie, we love you lots xxxxx

Alan, Moir and Anna WEBB donated £40 in memory of Millie

From Alan and Moir, their daughters Anna and Lisa and their families, would like to send their condolences and to say that Millie enjoyed life to its full and will be sorely missed. Much love from all of us.

You will be sadly missed x

Dementia takes away our loved ones,We need to tight back and do something xx

Paul Harman is attending the funeral 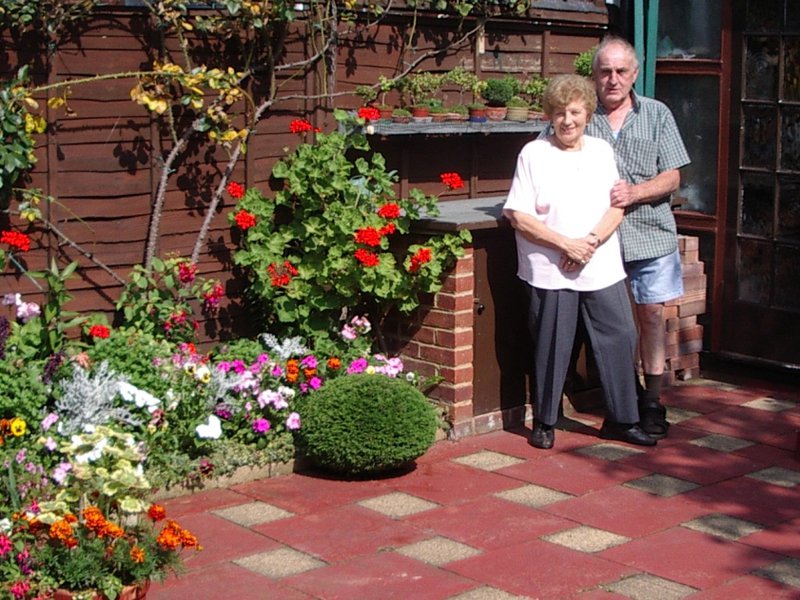 Aunt Mill and Uncle Bob. You will be missed but never forgotten.

In memory of my lovely Aunt Mill.

In memory of my Aunt Mill.

We are all going to miss you so much Millie, you and Bob welcomed us into your family when Dan and Becki met. we have shared so many happy memories.
Goodnight, God Bless Millie you are with your dear Bob. Love Mary & John. xx 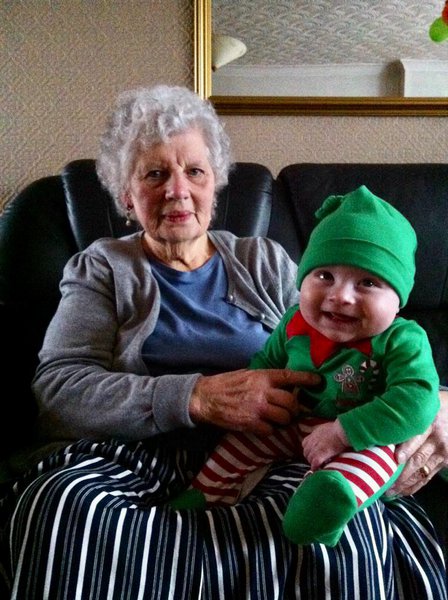 Aunt Mill and Uncle Bob. You will be missed but never forgotten.