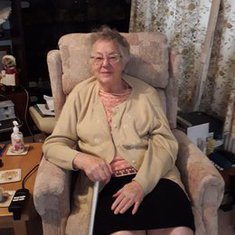 My mum Maureen who was born in 1938 in Totton, Southampton trained to be a nurse in the mid 1950’s in Southampton.
I don’t know how long my mum practiced for initially as I know when she met and married my father, they were both serving in the British Transport Police.
My father then re- joined the Royal Air Force in 1962 having completed National Service in 1958, just after they were married ( 1960) and my mum returned to nursing holding the position of sister in a cottage hospital in Bourne, Lincolnshire whilst my father was based in the area.
In 1970 we as a family moved to Hong Kong with my fathers job and I feel from memory mum probably carried out her most defining work in her nursing career by working for the Red Cross providing care to pregnant mums and young children of families living within the ‘Walled City’; at the time was recognised as one of the worlds worst slums and the epicentre of the China opium business. Most of her ladies and children were sadly addicted to opium, mums’ job being to ensure they had clothes and milk for the children and that the general level of health was as good as it could be. She did this for 3 years and now the city does not exist, thankfully after the Hong Kong government cleaned it up.
Her latter years she was very supportive of the Soldiers, Sailors, Airmen and Families Association (SSAFA), providing support to younger families in the RAF during the rest of my fathers career by organising various weekly events support the younger families separated from their husbands whilst their husbands were deployed. Indeed, it kept mum very busy whilst my father was deployed to both the Indian Ocean and the Arabian Gulf for 9 months at a time.
Being a keen knitter she could produce a knitted garment quicker than most knitting machines and all the family have been blessed with owning a garment made by her.
She also had a fascination with smoothing and flat irons, having an extensive collection which she used to tour the UK giving talks to WI groups to raise money for the NHS.

No more knit & natter, no more sewing tips, no more things to do together, life just went in a blip. Now with the husband you loved and happy once more. Out of pain but sadly missed. Your loving sister & brother-in-law. Berry & Glen

So many happy memories of times spent together at your houses in Bourne, Totton and Bournemouth. Also of your generosity with your knitting for our baby son.
The last time we saw you was a surprise visit and you were sitting reading in your chair as in the photo. As always you made us very welcome. Rest in Peace. With love Sally x

Thinking of you all in this difficult time. 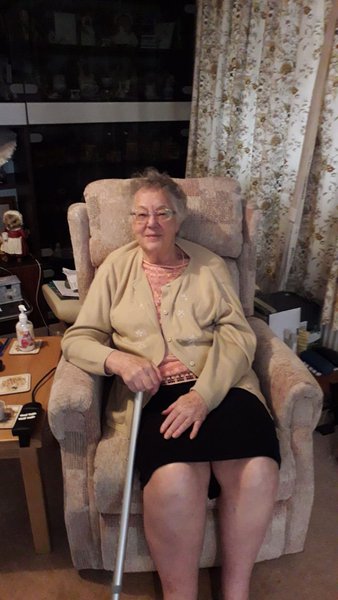