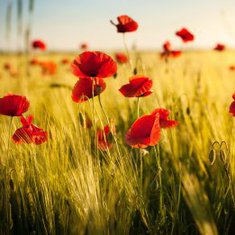 Donate in memory of
MarionGuide Dogs

Ivy's family names were Locker and Chapman, both families originating from Kent (Ashford, Maidstone, Stroud, and Dover), all migrating from Kent to South East London in the mid to late 1800's. Bill's family is not so well recorded, Mother was Catherine Lorden from Cork in Southern Ireland and his Father, also William Frederick, was born in Mile End, no other records have been found but one assumes his family must have migrated to London from Wales at some time in the 1800's.

Around 1942 / 1943 the houses in Camberwell were War damaged so Ivy, Bill, and toddler Marion moved to Sandison Street, Peckham. Brother David was born in 1944.

Marion, and David, were brought up in quite a “small world”. Nan and Grandad Locker lived at the end of the street, Aunt Gladys and Uncle Jack (Powell) lived opposite with their 4 children. Their younger sister Aunt Lil (Fuller) was living in East Dulwich a short distance away.

At the end of Sandison street was Bellenden Road Infants and Juniors schools that Marion attended; around the corner was Hanover Chapel Congregational Church where in time, Marion, became a Church Member.
After 11 plus exams, Marion attended Sumner Road Secondary School for Girls in Peckham. We believe she left at 15 years of age and got her first and only job at the Liverpool Victoria Friendly Society Head Offices in Bloomsbury Square, London; starting as an office junior and making several friends some of whom she has known for over 60 years and was still in regular contact with.

So, for the first 27 years of Marion's life, this was her world. Apart from family, school and work Marion's life revolved around the Church and Sport.
Her younger days with the church, involved attending Sunday School and eventually being a teacher; she Signed the Pledge as member of the Band of Hope Temperance Society; and was an active member of The Girls Life Brigade for many years into her early 30's, eventually becoming an officer and the leader.
Marion was a self taught pianist and organ player, in mid life these skills were used for Sunday Services in one of the churches she went to in the Gillingham - Rainham area.

Sports wise, Marion was playing Hockey and Netball in the Works (LV) Teams., she was doing Keep Fit and Exercise Classes with The Girls Brigade, she taught Keep Fit Classes at an Evening School, and in later life played Indoor Bowls socially and competitively.

All this sporting activity caused problems in later life, there had been undiagnosed sports injuries to her leg muscles and tendons which were much later discovered by examinations and tests during one of her spells in hospital. These injuries unknowingly had caused the severe leg and knee pain and were the beginning of the quite serious problems experienced over the last 10 to 15 years of her life.

Around the age of 30, Marion bought her first house in Rainham Kent which she shared with Mum, Dad and a succession of small pet dogs. Work was changing; Liverpool Victoria were reorganising their businesses, by 1996 they had moved to Bournemouth. Prior to the Head Office move from London; through the 70's and 80's Marion worked at a number of Branch Offices in Kent, namely Gillingham, Maidstone, Tonbridge, Erith / Belvedere. In those days, there was still a lot of cash over the counter business, not much on computers and lots of dealing face to face with customers which Marion enjoyed.
During this time, they moved house again to Marling Way Gravesend. By the early 90's Marion took early retirement, she was still physically active and enjoying life with her short holiday breaks with her former work colleague and friend Sylvia. She was driving and taking Mum and Dad out for day trips to the coast and visiting relatives and friends.

Dad died in 1993 and Mum in 2000 , from then on her life and health began to change. She still managed to take the dog for a walk and many of the neighbours remember those days of Marion alone walking around the streets with her little dog, happy to pass the time of day with them and their children as they went to and from the local school.

By about 2005 with worsening mobility issues, Marion had stopped driving, was not walking the dog, and rarely went out of the house. So began a long slow and sad process of deteriorating health and reliance on Carers to look after her. With falls, collapsing, leg ulcers, and pain, Marion had several spells in hospital, each time being discharged with a revised health care plan and was eventually just living in one ground floor room with a recliner chair, a hospital bed and 2 carers 4 times a day. After a hospital stay in January 2019 the discharge team at Darent Valley Hospital finally insisted she could not go home and must have residential care. So began the happier times at Russell Court Nursing Home, Longfield. After a months trial she was ready for a permanent move in. Marion had always argued against going into a care home, but after a few weeks she was so comfortable and happy, she was telling us she should have moved in years ago! At last Marion was getting full time nursing care, regular Doctors visits and somewhere safe and warm to live. One must not underestimate the value of friendly caring staff, plenty of activities and good companionship with other residents as beneficial to your well being..

The last bout of sickness, confusion, infections and admission to hospital in October 2019, resulted in the Doctors not being able to help Marion apart from prescribing antibiotics and pain killers.
Marion was discharged, went home to Russell Court and improved for a while. However, blood and lung infections returned just before Christmas; antibiotics and morphine helped a bit but breathing and speaking was extremely difficult.
Marion passed away about 6.00 pm on Saturday 28th December 2019. Just one month before her 79th birthday.

This Donation is made on behalf of Shelia and Tony Pearce. Shelia another long term friend of Marion's from Hanover Chapel from about 1960.

This donation is made on behalf of Marion's long term friends, Audrey and Ray Hagley.
Friends from Hanover Chapel Peckham since the late 1950's.

With Peace and Love, Forever.

In memory for my Aunt, I'll miss you xx

Caroline Dunne is attending the funeral

In Memory of Marion , was lovely to have known you rest in peace.

We miss you on Marling way. Best wishes Paul and Jo xx

Linda Cooper is attending the funeral

In memory of Marion Jones

In loving memory of my Mum's dear cousin, who touched so many peoples lives and will be much missed. Lisa xx

In loving memory of my Mum's dear cousin. Much missed. Lisa xx