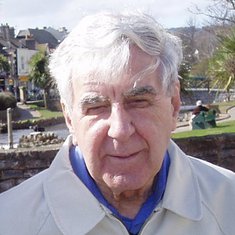 Donate in memory of
ReginaldAlzheimer's Society

Reginald - or 'Reg' as he was universally known - was born on 7th July, 1929, in Kingston, Surrey, the only child of Samuel and Alice Poulter. When children in London were being evacuated out of the capital at the start of World War Two, Reg went to live in Birmingham. There, as a teenager, he was briefly employed as a motor mechanic with a local garage before, at the age of 16, joining the Post Office as a trainee electrical engineer at the Great Barr Telephone Exchange in Birmingham. He returned to the Kingston area in 1946, aged 16, and two years later was called up for his National Service. Dispatched to Catterick Barracks in Yorkshire, Reg trained as a radio mechanic in the Royal Corps of Signals. On being demobbed in March 1949, Reg rejoined the Post Office as a telecommunications engineer. It was here, while working out of exchanges in Surrey that he met his wife, Joan Haine, who was a telephonist at the Elmbridge Telephone Exchange. They married on 29th August, 1953. In January 1959 they welcomed their first child, Martin, with a daughter, Carol, arriving in October 1960, and a second son, Simon, in November 1967.

In 1954 Reg applied for a job in the BBC Television camera department, a job he successfully secured and commenced on 1st November, commencing a 35-year career with the corporation. Over the course of his career, Reg rose through the ranks as a cameraman and then senior cameraman in charge of a camera crew, retiring in the summer of 1989 as a senior technical manager responsible for coordinating studio resources. Reg worked on many popular TV shows, including Eastenders, Doctor Who, Last Of The Summer Wine, 'Allo, 'Allo, Hi-Di-Hi and Only Fools And Horses (for which he’d maintain was his most enjoyable studio experience due to the on-set camaraderie between cast and crew). Some of the shows he worked on are listed for posterity online on the Internet Movie Database.

Reg passed away six weeks after his 90th birthday and just a week or so before what would have been his 66th wedding anniversary with Joan. In recent years he'd been coping with Alzheimer's Disease and prostate cancer, and in August 2018 moved into the Galsworthy House care home in Kingston, where he was looked after by a wonderful team of nurses and carers, right up until his passing.

He will be missed by us all, as a loving husband, father, grandfather and great-grandfather, especially for his gentle sense of humour and his love of comedy, but also for the playful sense of fun he expressed with the children in his life.

Sending love and thoughts to the Poulter family at this sad time. Love from the Taylor's.

With our deepest sympathy

RIP Uncle Reg. We always spot you in the credits of those classic BBC shows.
David, Sara, Mallie and Finnan.

We all have very fond memories of Reg.

Very sad news, he must have been a great Dad, as he brought up very caring and thoughtful children. My condolences to you all.

I am sorry that I cannot attend the funeral tomorrow, my thoughts and prayers will be with you all. I have fond memories of your family games nights organised by Uncle Reg a legacy that has continued into my own family.

We will forever look out for your name in the BBC credits of all your shows.
Rest in Peace Reg.

Michael and Margaret Byrnes donated £30 in memory of Reginald

In loving memory of a dear brother-in-law, Reg Poulter.

With thanks for all the happy times we have spent together in Devon and beyond.

Sorry I won't be at Reg's funeral on Tuesday; my thoughts are with you all. Having known Martin, Simon and Carol for many years, Reg must have been a wonderful father and role model. X 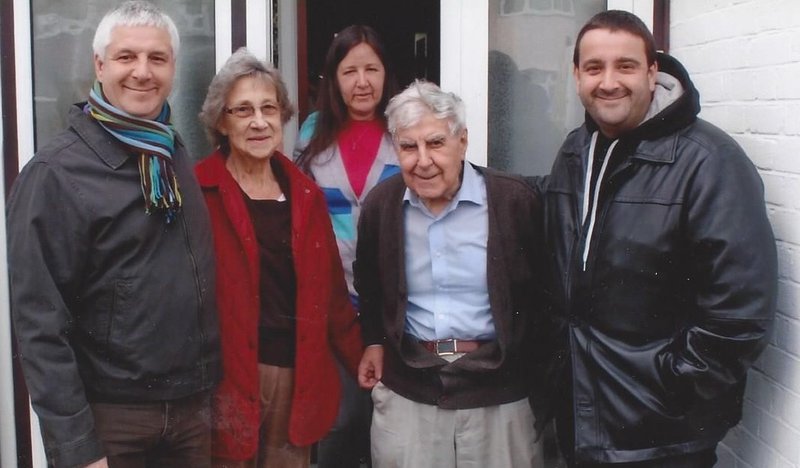 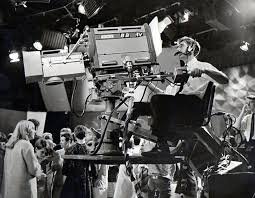 Dad working at the BBC

In memory of a lovely man. Will remember your stories of TV whilst on my visits to the Poulter residence whilst a young man. Rest in peace Reg.

Paul Colvin is attending the funeral

Unfortunately I cannot attend Reg’s funeral but, from reading the lovely tributes being paid to him, I know he will have a “good send-off”. Tears may well be shed, but I am sure there will also be a lot of laughter as everyone shares their memories. I will be there in spirit with you all and I hope the funeral is everything you want it to be.

Reg Poulter: Known for… Doctor Who, Only Fools and Horses, All Creatures Great and Small, Eastenders, Yes Prime Minister, Blue Peter, Record Breakers, ballets, news, plays…… and many, many more programmes not listed on IMDB.

But that was just his job. To me he was:

The Dad known for making Christmas fun, with a new board game every year, treasure hunts he invented for the whole family to solve, and little presents we could open when we’d completed a silly task. Thoughtful presents, like the pack of electrical fuses he gave me when I was living in an old house.

He was the Dad who built cupboards and shelves that could hold his weight. The Dad who wired a buzzer in the garage so Mum could call him in for dinner. The Dad who taught me how to paint and how to hang wallpaper, how to grow tomatoes and how to feed the lawn. The Dad who would fix things.

He was the Dad known for his sense of humour - convulsed in silent laughter watching Dad’s Army or Tom and Jerry. The Dad who tolerated us children drawing faces on his knees when he dozed in his chair after Sunday Lunch.

He was the Dad who organised the games at children’s parties. The Dad who set us puzzles. The Dad who designed a poster for a competition challenging my elder brother and myself to draw maps of our route to school, then made us both the winners (my prize was a Brownie compass). The Dad I played cribbage with.

He was the Dad who kept meticulous records: the weather, his photography, his bank accounts, the meter readings every Friday. The Dad with files for everything from places we’d visited on holiday, plans for decorating tasks and gardening, receipts and instructions and guarantees. All organised and put away, until Alzheimers began to scramble his mind.

Known for his work at the BBC, as cameraman and technical co-ordinator. But that was just his job. Mostly, Reg Poulter will be remembered as a family man; a father, grandfather, great-grandfather, husband. My Dad.

Memories of my Dad

Dad taught me to drive in an old Mk2 Cortina, when we were on holiday in Devon. I remember going round and round a car park on Dartmoor and learning from Dad how not to crunch the gears. The tuition helped me to pass my driving test first time round.

Dad taught me about photography - “Let every picture tell a story” - which was invaluable when I was using old fashioned 35mm film. He bought me a camera - an AGFA Superselect - from a colleague at work which served me well for many years.

For several years running I took Dad to have his memory checks when the dementia had been diagnosed and the Alzheimer’s was developing.

We went to Tolworth Hospital, not a stone throw from where Dad had lived as a boy before being evacuated to Birmingham (Great Barr) during WWII.

Every time we saw the Doctor, the same assessment test was given to Dad which included questions about the day of the week, the year, the name of the Prime Minister at the time. The tests took place every six months for several years running.

On one occasion just before one Christmas when Dad’s memory was getting worse, he and I went shopping for a present for Dad to give to Mum. We went into Tudor Williams in New Malden and chose a handbag for Mum and then sat in the coffee shop and chatted. I told Dad that I was going to Birmingham the next day on business and asked Dad if he remembered anything from his own time when he lived up there. He remembered the engineering company that he worked at - casual labour - making sure car batteries were charged up. He remembered the name of the company and we looked up the details on my phone. The business has gone many years before but Dad had remembered the name correctly from some 60 years plus ago.

We were ready to set off and he then asked what we were going to buy Mum for Christmas.

He could not remember the handbag bought a few minutes before. Such was his memory.

I spent many hours with Dad waiting in hospital corridors over the years while he was having treatment for prostate cancer. Among all the check ups, x-rays, scans, and reviews with the oncologist, a regular three month infusion was required which Dad put up without complaint. Dad was always easy to care for as long as he had a cuppa and a biscuit periodically.

One of the saddest days of my life was taking Dad to hospital by ambulance after he had a series of falls all on one day, and the ambulance staff insisted he should be assessed. That was just before his 89th birthday. It was the last time Dad was at his own home, and I had a feeling that day he was leaving his home for the very last time and it proved to be right.

Despite the many times after that he would say that “I’m going home now” he never did return and his chair in the lounge was empty for a long time.

One of the things that gave him great pleasure in his later life were the times spent with his grandchildren. Playing in the garden at Oxford Crescent and Elgar Avenue. Holidays in Majorca and Minorca. Surviving without drowning on a fun filled week on board a boat on the Thames when James and Daniel were young. Time spent in Somerset with Andrew when Dad was still mobile.

Later when his great grandchildren came along, they made him smile and beam with joy. They are part of the legacy that he leaves behind.

And Mum. Who as we all know has been the person who has been so patient, so amazingly resilient, so caring, so strong, and with her tremendous loyalty to Dad throughout his lifetime, and especially at the challenging times towards the end of his life while still battling with her own health issues. Her devotion has been magnificent and a fine example to all of us.

As I hope those who knew my dad will post their own recollections of him here, I've written my own thoughts and memories on my blog, 'Where Are We Now?'.

You can read the post by copying and pasting the following URL: https://simonpoulter.blogspot.com/2019/08/reginald-john-poulter-7th-january-1929.html

Simon Poulter is attending the funeral

Nicola Jenkins is attending the funeral

Larry Hill is attending the funeral 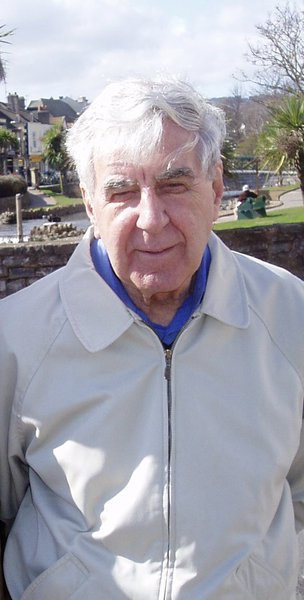 Dad working at the BBC 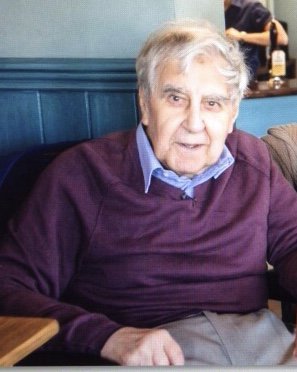 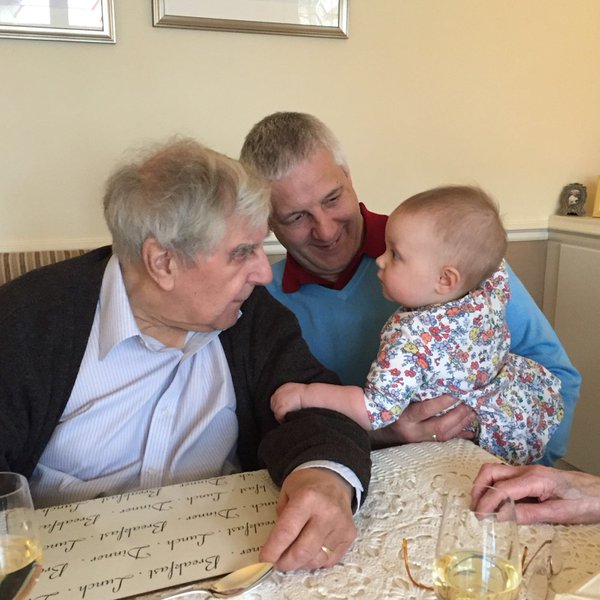 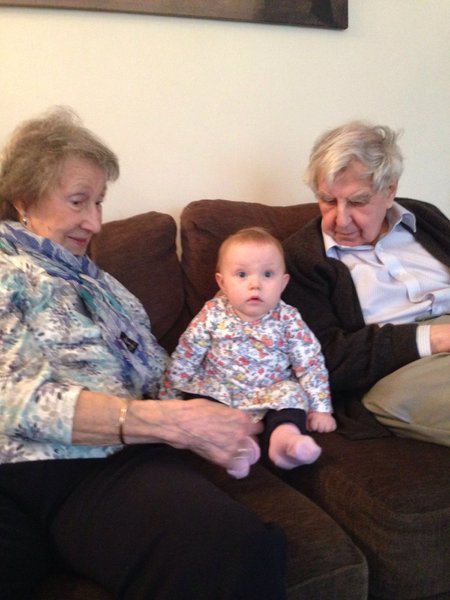 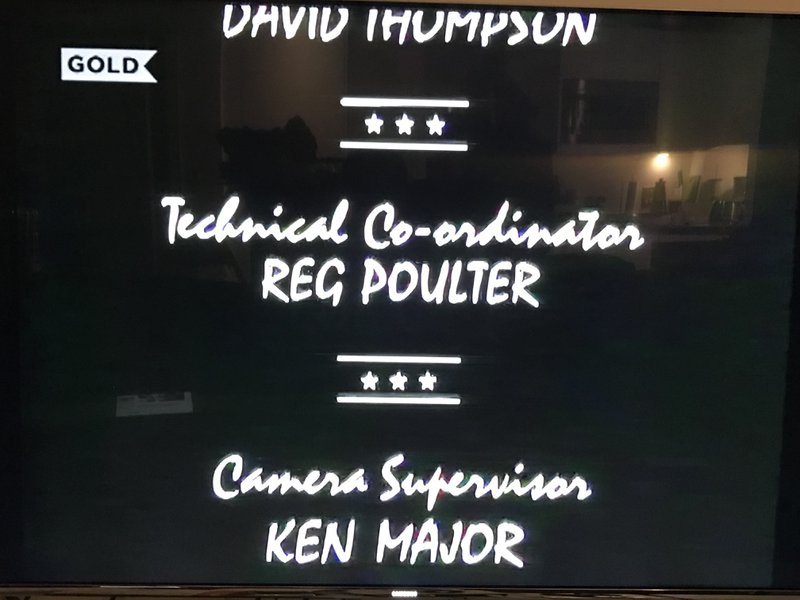 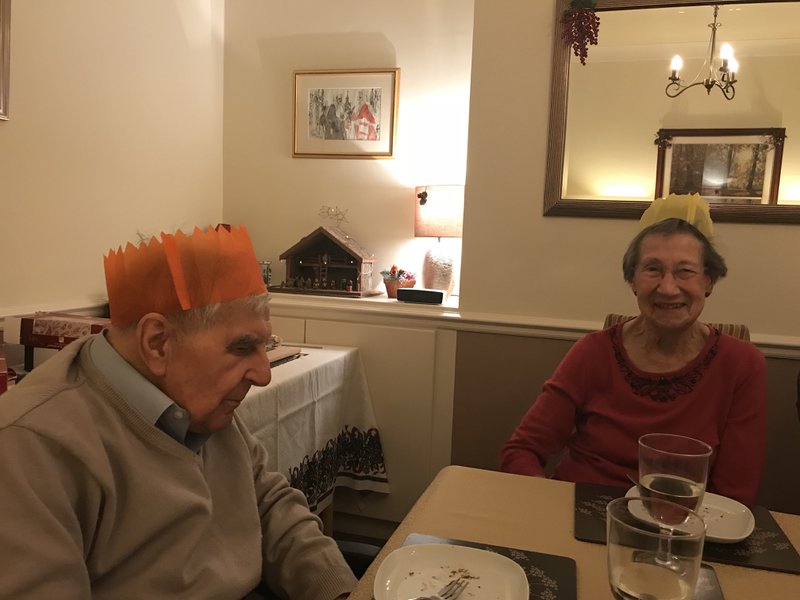 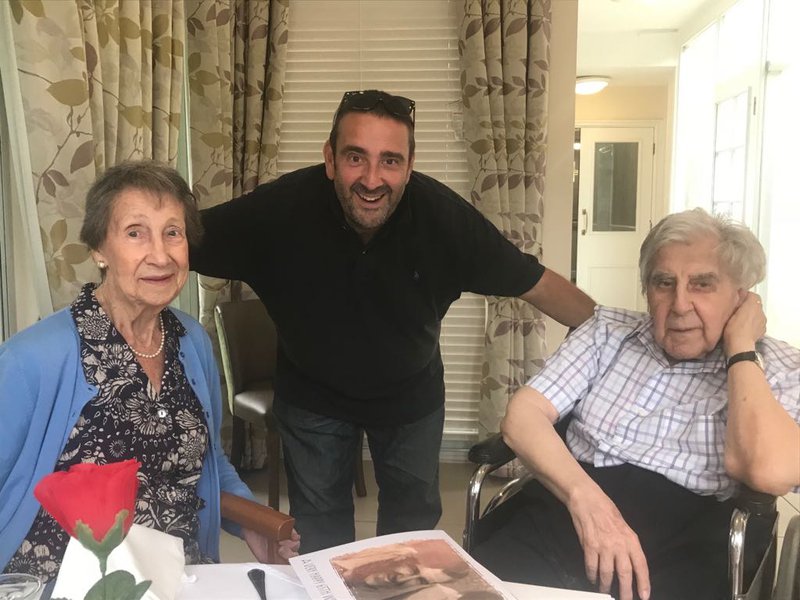 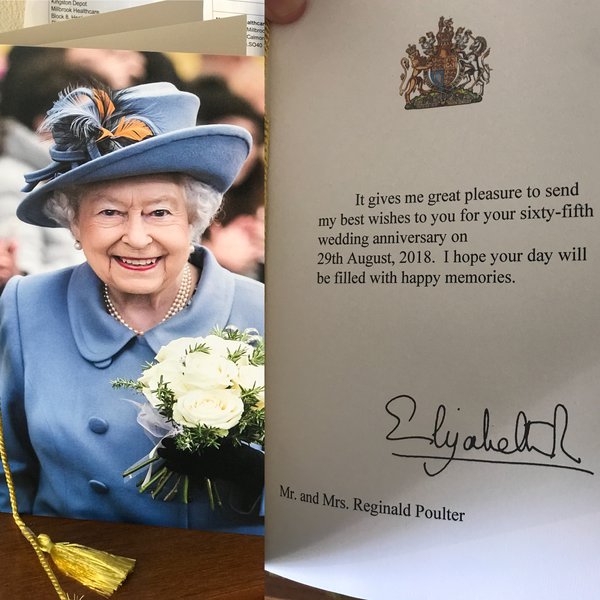 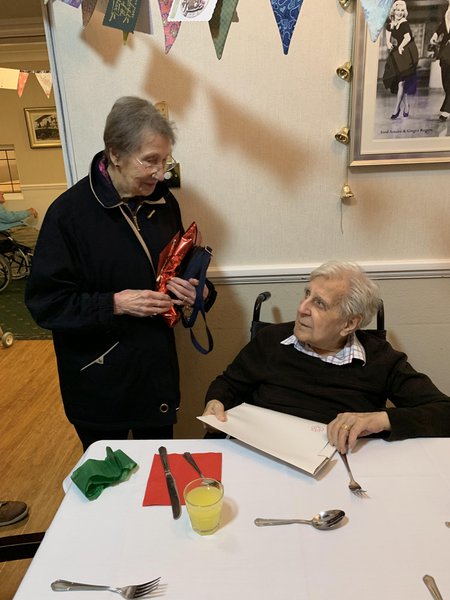