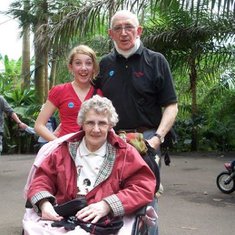 In loving memory of the late Brenda Olive Brewer who sadly passed away on 22nd February 2015 after a long battle with her health. Brenda was born in Swindon the third daughter and middle of the 5 sisters. After leaving school aged 15 years Brenda became a Nanny for the local Doctor.
Next job was working in London in Singers Sewing Machine shop. Where she met actor Roger Moore, bless her she didn't realise who he was. Brenda moved back to Swindon and then worked for Plessey where she met Don. They dated but it didn't last. It was a few years later when Don returned to visit friends in Swindon that Brenda and Don became an item. This time it lasted and they married 5th November 1966 and moved to Nottingham with Don's work.
They had their first child here on 8th July 1968 and moved into their first and only house at Bingham in the winter of 1968. Being one of the first people in the area to get on the telephone so Brenda could remain in contact with friends and family "down south". Roger went to stay with Aunite Chris in Swindon (1971) when Brenda went into hospital for about 3 months to have their second child.
Family complete Brenda stayed at home to bring up their two children while Don spent his time working all over the country.
Brenda loved baking, painting and going to the park. She could push you so high on the swing :) her best trick was pushing you and running under the swing to appear in front of you. We used to walk over the fields and back home from the park.
Brenda's home was very busy with friends coming round for a cuppa and a chat. When all the children were playing out on the street we all come to number 16 to get a drink or use the toilet, even thou the other lived on the same street Brenda was the most friendly one to go to.
Brenda's elderly Mum had 4 daughters at Swindon who looked after her between them but every 6 week holiday and any other time she could, we moved to Swindon to live with Gran so Brenda could give her sisters a break.


In the late 70's Brenda got a job at Toot Hill Comprehensive in Bingham as a Dinner Lady. She worked here until at 70 years old (2003) she had to retire.
As her children grew and started joining groups like Scouts and Guides with brought on more activities for Brenda. The Scouts used to hire the local swimming pool giving Brenda chance to learn to swim on her back and to swim 25 meters :)
Brenda joined Bingham's Women's Guild, they used to have meeting every week but also organised other activities, dances, meals and day trips. She made many friend through the group.
When the family was older a small group of friends organised holidays for 4 or more of the ladies. Visiting Scotland, Ireland, Austria and Benidorm to name a few places.
Aged 18 Roger left home to attend Birmingham University Brenda felt this loss greatly her first born leaving home was a big adjustment. Jenny left school at 16 to work for NatWest at Bingham so was still very much at home. Leaving Brenda and Don finally in 1992 when she bought her first house with soon to be husband Chris.
After helping to plan Jenny and Chris' wedding in 1993, Brenda became a grandparent in 1997 when Megan Rose decided to come to town(late). In 2000 her grandson Harry Joe arrived to complete the family.
We started to have BIG family holidays going down to Cornwall together, 6 of us in a large caravan. Soon we bought two caravans and became regular visitors to Roseville Holiday Park just outside Perranporth. Brenda and Don had a summer pitch and would go away for months at a time. They had adventures all over Cornwall. When Jenny, Chris, Megan and Harry joined then for a couple of weeks every summer we always went down to the Eden project. Brenda really enjoyed these day trips sometimes we'd go two or three times a year to Eden.

Although having many illnesses and Doctors being unable to move her to hospital as she was so ill as a child Brenda has always surprised her doctors and pulled through. Many times they gave her a very short life expectancy as a child and when she was in her thirties but she keep fooling them all right to the end . Brenda joined our family as a mother's help in 1948 just after she left school at the age of fifteen.
My sister was born in April 1950 and Brenda then helped to look after a two year old and a baby.
A year later she became a full time live-in nanny and moved with our family to Bournemouth. She stayed with us for seven years altogether and was extremely good with us children.
She was a natural teacher and was always patient and kind. She regularly came on family holidays to Mevagissey in Cornwall and I have happy memories of picnics, boat trips and excursions with her there.
She left to do a Singer Sewing Machine course and lived for some months with my grandmother and aunt in London.
Later she used to come to stay with us in London and was always very good with our own children who have very happy memories of her visits. 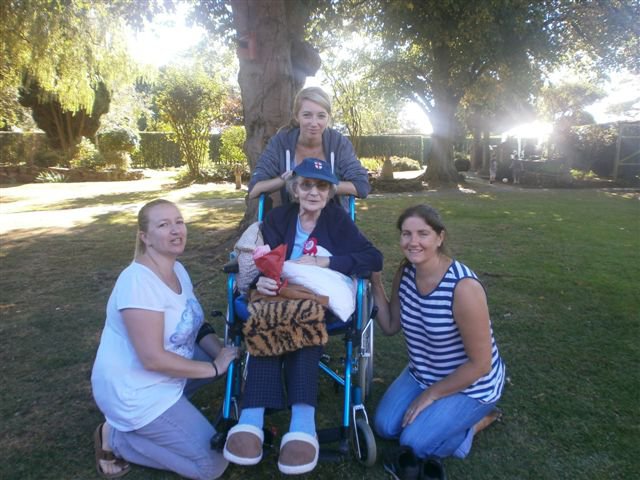 In loving memory from Tumph,Jane, Cliff and B 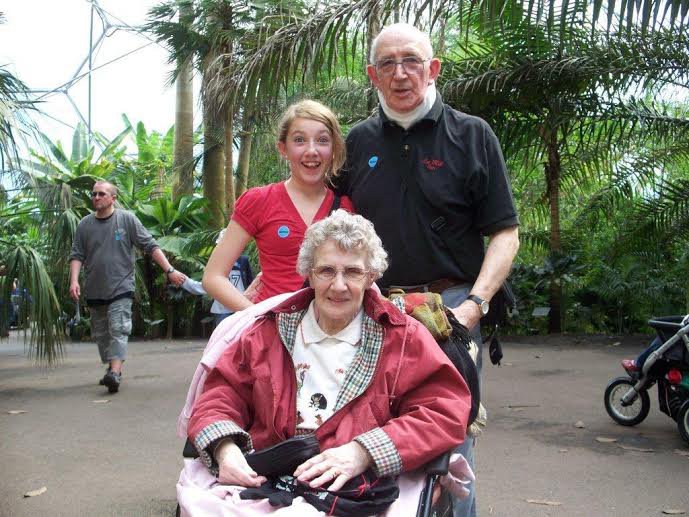