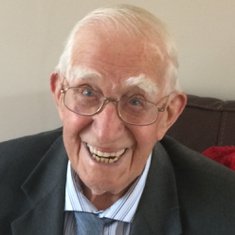 FAMILY TRIBUTE - read at the Service
Arthur William Riches was born on 17th August 1921 in Wangford, Suffolk and was the second oldest of three children. At 3 months old his family moved to Geldeston and despite moving three more times in his life, he lived on that same street until July 2014.

After meeting Queenie May Blaza at a local village dance, they were married on 5th August 1946 in St Michael's Church, Geldeston. After becoming step-father to Mervyn, Arthur and Queenie went on to have two further wonderful children, Melvyn in 1948 and Leslie in 1951. 64 years (2015) on and Arthur's empire included seven grandchildren, 11 great grandchildren and one great great grandchild.

Most of Arthur's work-life was spent on farms working as a cowman. At Aitken's farm he was also selected to be his foreman's chauffeur. Arthur was a hardworking man who had early starts and worked long hours, but always had an easy smile and a kind word for anyone. On one fresh Christmas morning, Leslie remembers his Dad waking him very early so that they could open presents together before Arthur went to work.

Later on Arthur became a Sawyer at Darby's Woodyard in Beccles which he enjoyed due to his love of working with his hands. Eventually, his devotion to Queenie encouraged him to take early retirement to help care for her.

In his personal life Arthur loved cycling and would ride for miles around the Norfolk countryside. Les remembers fondly his dad teaching him to ride his brand new yellow bike down Station Road, the first lesson ending with Les falling into a patch of nettles. Later, when Geldeston Hill started to feel that little bit steeper each ride, Arthur did not let that stop him. He simply went and bought an electric bike and continued riding until his mid 80's.

Aside from his family, his other passion and life-long love was gardening. Right up until he moved out, Arthur would grow plants, flowers, fruit and vegetables in his own garden. He would often grow too much for himself and being a kind man with community spirit hr would share his produce with family and neighbours. Melvyn fondly remembers a season recently where his Dad started some tomato and cucumber plants for him. During that Summer Melvyn had a better crop that his Dad, which was the cause for much teasing, but Arthur took the credit for teaching him so well. Les also has fond memories of gardening with his Dad. He recalls the days of hard labour where he would follow along behind his Dad dropping potatoes into the holes that had been dug.

Les also remembers his Dad setting fire to the chimney one time and the kids all trying to put it out by throwing snowballs at it. Having said that, Arthur was a dab hand at cooking and loved a hearty home-cooked meal. Stews and rice pudding came out on top as family favourites an there was always a roast dinner cooked on a Sunday.

Staying with food, Lisa remembers a funny story from Pancake Day 2013, when she visited her Grandad and asked him whether he had enjoyed his pancakes. His response made her laugh; 'the carton said it would make six, but I didn't think I could eat six. I just made two big ones with the mixture instead...'.

Arthur was a true family man and loved holidays with his family. Everything from walking in Wales and the Lake District with his stepson and family, to boating on the Norfolk Broads and in more recent years, caravanning with Melvyn around Norfolk and Suffolk where they would often meet Lisa and Chris for lunches or days out. Chris remembers how welcoming Arthur was when they first met 3 years ago. Quickly developing a strong bond due to Arthur's happy and friendly personality, Arthur would often 'just have a little job' for Chris to do when he visited. This usually ended up with a day's work or several jobs, but nobody minded because we knew Arthur would do anything for anyone when he could.

One of Arthur's highlights was enjoying a good game of cards with his Grandchildren when they visited. Nigel, Sue and Caroline remember him teaching them how to play cards on a Saturday night for matchsticks. Kevin remembers when he used to try and fool Grandad with Euro coins, but Arthur was too smart for that. He wanted his winnings in British coins and 'not that old rubbish'.

Les, Rosie, Scarlett and Niall sometimes had Arthur round on New Years Day and would make sure that he brought his bag of pennies with him. They would joke with him that they wouldn't take him home until they'd won them all off him, but Arthur enjoyed the challenge.

Arthur had his eccentricities but who doesn't? When it came to buying things for his house, garden or being generous with family, he would b the first with his wallet out and ensured he had the best of everything. However, if his paper delivery went up by a penny, he would cancel it!

He also had a regular evening routine which we think is the secret to his long, happy life. Around 7.30pm each night, he would pour himself a glass of wine, grab an apple and two squares of chocolate. Always two squares, never more. then he would settle own in his recliner chair to watch the different TV shows and sport that Lisa had painstakingly marked into his TV times each week.

Arthur was also lucky to have some lovely neighbours. During his last year at home, Betty would come round each day and help him prepare lunch. This also allowed them to have a good old chat and a good gossip. Then there was his 'old partner in crime' Clem, who was sadly lost at the end of 2014. Every morning Clem would pop over to Arthur's for a cup of coffee and they would put the world to rights. Clem would take Arthur for his pension every Monday and they would help each other out with gardening, both clearly knowing their way was best! Arthur was also Best Man at Clem's wedding to Pam, which he was very honoured by, especially at 90 years old! Arthur joked that he might hold the title of 'Oldest Best Man' but we all agree he truly was the best, irrespective of age.

On any day you could tell Arthur was excited and pleased to see his family because of the way his face would light up. Lisa remembers the heart-warming moment Arthur first mt his Great Grandson James, both of them in tears. That affection for family was still evident in his last days, as even he was tired or not feeling the best, he always had a smile and a kind word for any of us.

In the words of his whole family, Arthur was an extremely polite, loving, caring man who always had a smile on his face. No one can remember him ever getting angry or losing his temper. He was appreciative of his life and enjoyed every moment. He'll be remembered differently by everyone, but one thing we can all agree; he's been an inspiration to us all.

I did not know Arthur however his Grandaughter Lisa is a good friend of me, she always told me what an incredible man he was. Would love to donate in his memory 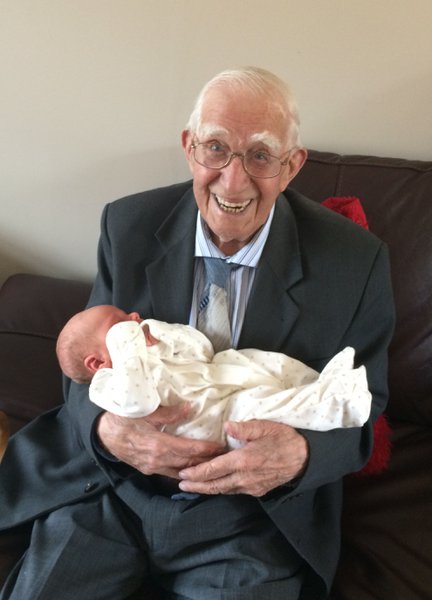