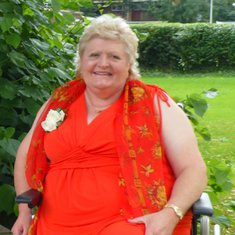 Donate in memory of
JacquelineDiabetes UK

In loving memory of my sister Jacqueline Smith (Jackie) who sadly passed away on 9th December 2014, following prolonged illnesses exacerbated by diabetes.

UPDATE: - below is the text I wrote for Jackie's eulogy service yesterday.

Firstly, I would like to thank you all for attending Jackie’s funeral today. I realise that many of you have had long journeys to get here. Being so close to Christmas, too, with all the other pressing matters that the festive season brings, your attendance is really appreciated. I’d also like to thank you for all the kind comments, memories, and condolences shared so far by many of you via the on-line obituary page. These have brought a smile, and fond memories, to me and, I trust, to you too.

Sadly, of course, it is less than a year ago that many of us sat here for the funeral of Jackie's late husband, Stewart. It is certainly true that following Stewart’s funeral, Jackie's overall health deteriorated. Indeed, Jackie spent more time in hospital than at home during these last few months of her Life.

Jackie was born in 1947, on Rabbie Burns’ day, 25th January. Apparently, her birth had complications and she very nearly didn't survive for long after it. 1947 had extremely heavy snowfall all over the United Kingdom (followed by extensive floods, which saw dad – once again – being called upon to drive a DUKW, as he drove during the war, this time to rescue people from flooded houses in Nottingham). The snowed, icy roads meant that transport by ambulance to Peel Streets Women’s hospital was very dangerous and not without incident. Fortunately, all was well with Jackie and mum after the hospitals interventions.

Both Jackie and I were children of the 50’s and teenagers in the 60's – the so-called “baby boomers” beloved of the media. Rationing of some items, following the Second World War, still applied in the early 50’s. Life was hard. It has been said that we had won the war but lost the peace. Mum and Dad, Alf and Bet, rarely spoke about these times. However, I’ll mention one shared memory with you now. Dad kept chickens in the back garden, not as a hobby or “gentleman farmer”, but as a way of introducing some variety into our diet. Hard to believe now but chicken meat – and eggs – were luxury items in those days!

One day, when Jackie was about 7 or 8, she went out to feed the chickens some table scraps mum gave her but the cockerel took exception to this intrusion and pecked her, hard, on her nose. Jackie rushed in the house exclaiming “He thought it was a bit of meat!!!"

Jackie started her working life as a textile machinist at Everlastic (mum had worked for Burberrys before the Second World War) but spent much of her following working life, nearly 30 years, with Nottingham City Transport in the canteens. Ill health led to an early retirement in her mid-50’s but not before Jackie had met very many people, from all walks of life, as colleagues - who later became close friends, some of whom will be here today.

Present here, of course, are friends and family, neighbours and acquaintances. Whilst we may not know who the person across the way is, we do all have one thing in common: Jackie. She is the reason we are all here today. Jackie left her mark on everyone she came into contact with during her life time and we are here to celebrate her Life. She would be delighted, and humbled, with the turn out I am sure!

Jackie had a technophobes dislike, distrust and disinterest in the technological wonders that occurred throughout our shared lifetime. The operation of televisions, computers and the plethora of associated technologies were mysterious to her and akin to the black arts. Jokingly, I always said that Jackie was an excellent steam engineer. Strangely, Jacqueline never disagreed with my assessment – except that her knowledge of steam was likewise limited – except for that issuing from a steaming kettle when a cuppa was needed!

Despite all this, and much to her own surprise, Jackie learnt to drive - an internal combustion engine too, not the external combustion type of a showman’s engine!! Now you know why the Thursford Christmas Spectacular was so important to her!

Very much a seasoned, experienced and committed traveller, Jackie visited many countries and continents, including Australia, and loved every moment of her travels. Tragically, her journeys were much reduced when she had her leg amputated due to diabetes complications.

As Jackie’s mobility decreased she found delight in her small garden: populated by meerkats, windmills, spring-loaded metal "animals" (or "tat" as I called them!!), these objects did help her stamp her own individuality on her "patch". Flowers, with their colour, aroma and texture, were ultimately what Jackie loved. Nature and her sense of place within it.

As part of our tribute to Jackie, there are packets of seeds available for you to plant. We hope this will bring you some pleasure in the future and be a memory of Jackie’s own passion for nature.
In a similar vein, we are sponsoring 4 trees to be planted in the National Forest. Whilst the trees can’t be named specifically for Jackie, that is, with a permanent plaque attached to them, we believe that the collective planting of these trees will beautify the environment and reduce the negative impact of carbon emissions. Those that live close enough can visit the forest and enjoy the serenity within it and simply reflect on Jackie’s presence.

I am sure all of you will have profound memories of Jackie: be they light-hearted, tragic, frustrating, sad, happy, amusing, ordinary, extraordinary ones. I hope you continue to hold her in your thoughts, as indeed I will.

We will all remember Jackie for her really generous, compassionate and loving nature. Following her late husband, Stewart's illness and his demise, Jackie and I spoke most days - nothing news worthy and certainly not important in the whole scheme of things. Even now, if the phone rings in the evening, I half expect to hear Jackie on the other end of the line. I miss her, as does everyone else who had the pleasure of knowing her.

Jackie is now on her next great journey and adventure: one which, ultimately, we all will travel. I am sure we all wish Jackie God speed, and we'll see her in our dreams.

Could you please take a moments silence and think of what Jackie meant to you?.....

Sue has uploaded some photos of the flowers, etc, and these should be available to view on this site tomorrow.

RIP Jackie - all our love

Stephen and Christine Shaw donated in memory of Jacqueline

We never really got top know you but shared a great day a Sue and Genya's wedding. Rest in peace

Forever with us in our memories and dreams. 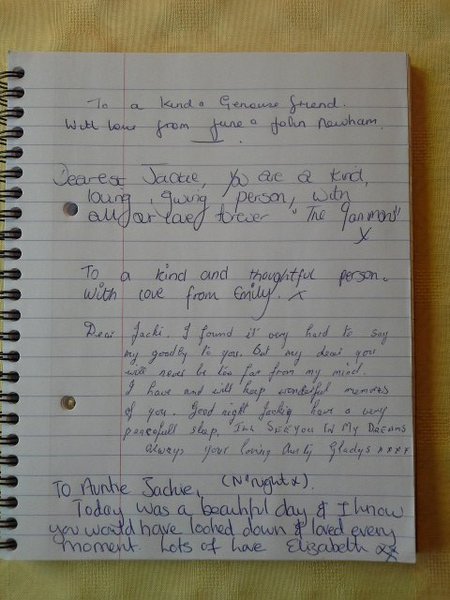 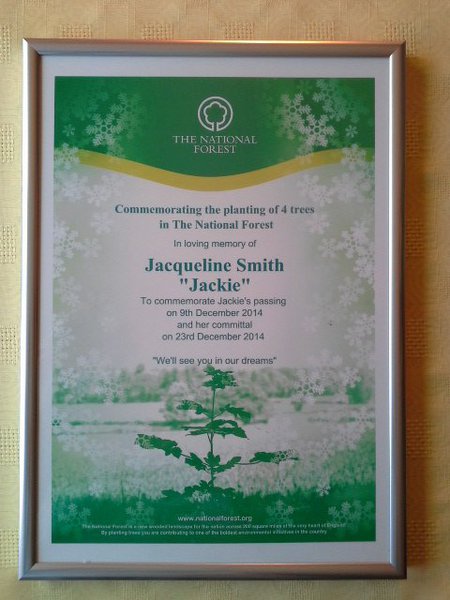 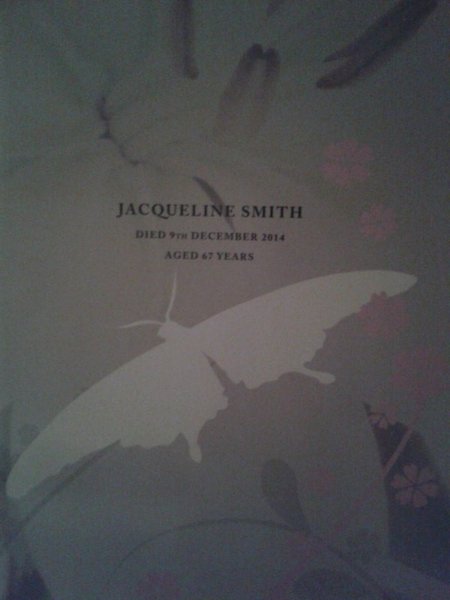 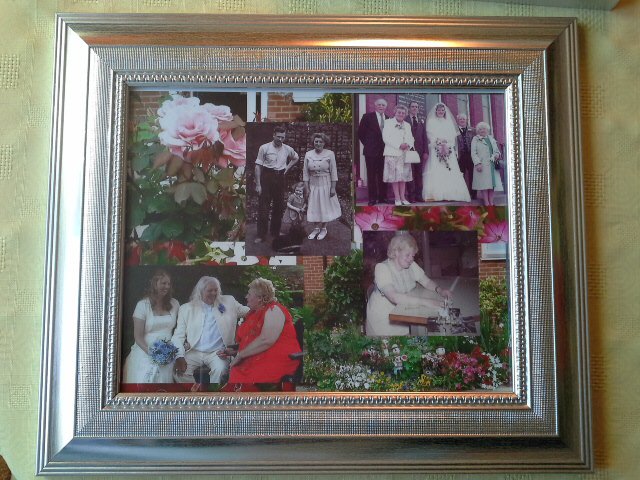 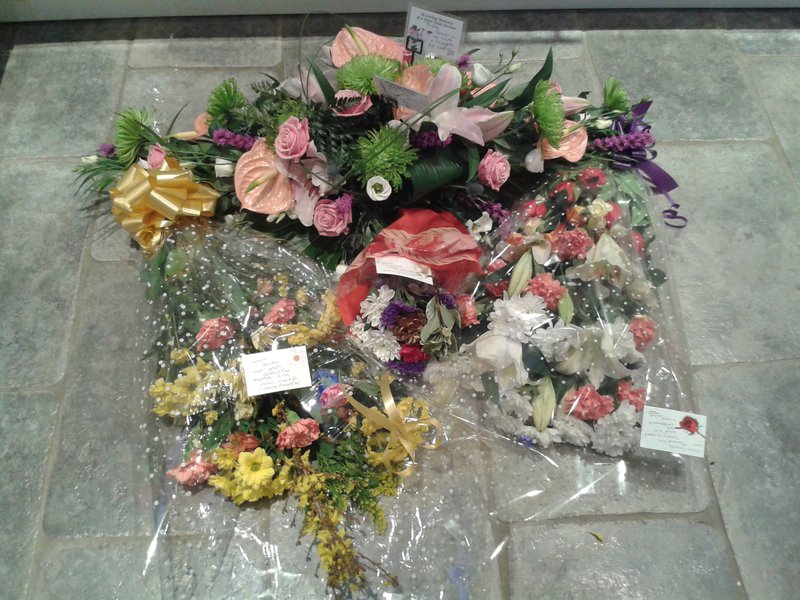 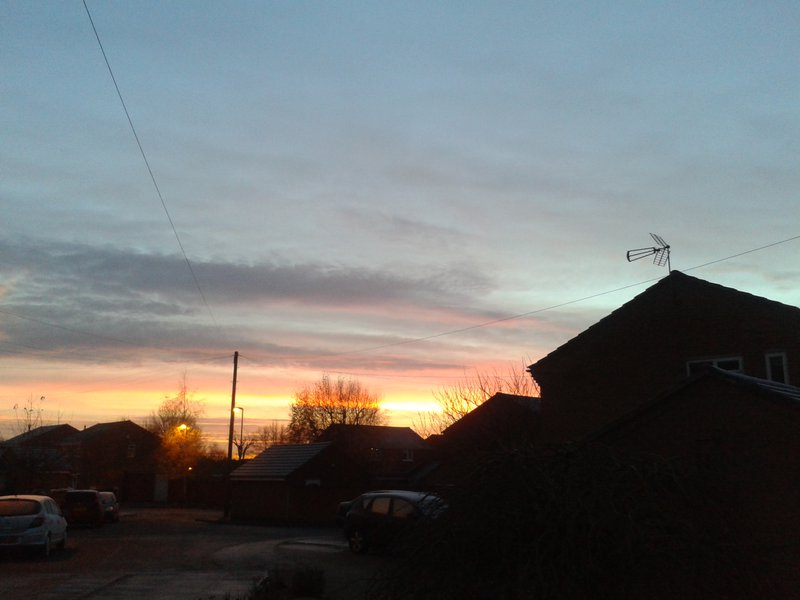 I am writing this memory on behalf of Chris and Mal Connell. Chris(tine) is Jackie and my cousin (the daughter of one of my mum's sisters). Chris married an "Aussie" in the 60's and settled over there. They are "bonza" people!! :)

"Jackie was always cheerful even through her illness, kind and generous and a good friend. Remembering the times we all spent together.

"We'll always remember our visits to you

Genya, posting on behalf of Chris and Mal Connell Australia.

Dear Jackie, As neighbours we used to say hello and then we met at Beeston Bus Station and got chatting, we became friends and had good times together. We will miss you lots but we have the memories. till we meet again god bless Ruth & Alan xxxx

Dearest Jackie, though we lived far apart it was always good when you were around, i knew you form a little girl, and watch you grow into woman hood, a very loving person, wish we could spend more time together, but you my dear are in a better place , no more pain, sleep peacefully Jackie lyn , god bless were meet again xxxx

Forever in my memory, miss your cheerful chatter on the phone, no one will take yor place, Love you always wonderful memories, Aunt Gladysxxxxx

known you since I was a teenage apprentice. You were always Genya's sister and always present.
So glad we spent time chatting at the wedding, it was a good day. It is good you are on the next great adventure. We are ten times less by one.

Jackie has always been in everybodys life , Jackie came more into my familys life when my first child was born, Emily, i remember very well she sent some gifts for Emily, that was such a kind thing to do, Jackie always remembered every birthday and christmas we became very close always phoning i remember one year her and stewart decided to come and visit us when we lived in Worcester, it was a short visit but a fun one, I then met Jackie and her friend Marie at a craft fair one Christmas in Birmingham, we then some years later moved to Bromsgrove in the midlands, the Gammons were coming closer to up North as i would joke with Jackie, country bumkins as i would say as originally coming from down South. Jackie made the visit to Bromsgrove with Anne her carer at that time, we put on a good spread and had a fun time, Jackie was in her wheel chair then and we struggled to get her in but we did, at one point , as id had my second child Joshua he was a todler still i had my stair gates up still and Jackie said i need a loo, oh my god the fun we had and laughter trying to get this stair gate off the wall youd think after have one child, baby equipment would be a wash no such luck that day, but we managed in the end. Sadley my Grandad died, but to Jackies due she was always true to her word she came down to Reading with Anne and payed her respects, i was amazed of her will back then and determination that being in a wheel chair didnt stop her, as some months went on myself , my Nan and Emily & Joshua came to Nottingham to stay and see her in her new place, i think Jackie had been there a few months, we had a lovely time with Jackie, we all came to the conclusion that we would visit every Christmas spend the day and go to lunch, and we did. Earlier this year Stwart her husband died, i think it effected Jackie more than she would let on , she became quite ill this year and we visited her in hospital, she still was always in very good spirit, never really opening up, Sadley this Chirstmas we didnt get to meet or go out, and say a finale good bye, i think what i am really tring to say, sorry if some people think i have gone on to long, Jackie always thought of everybody else, she was kind, loving , and very giving, i know she had her own ways but dont we all, thats what makes us all individuals, maybe its because she never had children of her own and she wanted to feel that it was like having children of her own, if that makes sense to you all, but i will remember Jackie as the person i saw and will miss her very much, miss a good old laugh...and chat. Rest Peacefully Jackie , Donna, Simon, Emily & Joshua xxxxx

To my Auntie Jackie.

You were a beacon of light, good humour and generosity.

May your next journey be a happy one Auntie Jackie.
Love from the Gammons xxxx 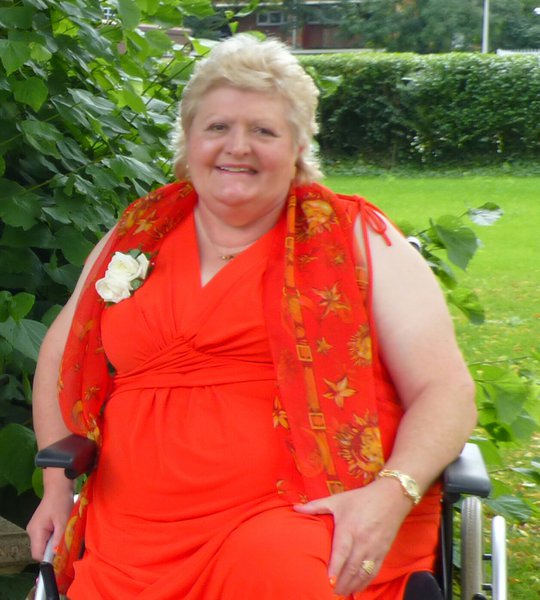