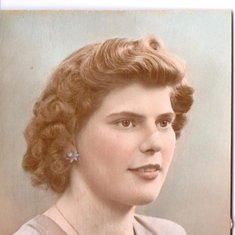 In loving memory of the late Jean Cynthia Scriven who sadly passed away on 7th December 2014 aged 86 years.

Happy mother's day
Missing you today especially .
Always makes us smile remembering your comments on the out of date sauce.
Lots of love
Pam and Rick x x x

Linda and John Spillings donated £15 in memory of Jean

Remembering a very special lady and the laughs we had on our trips to London.God bless you "Jeanie Java " 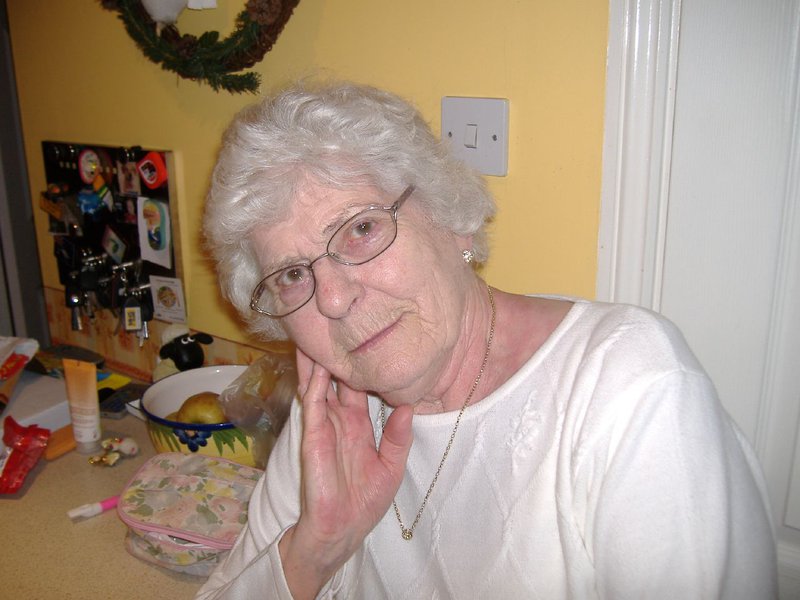 Maisie Palmer donated in memory of Jean, a dear friend

To jean, a lovely lady.

In memory of jean. 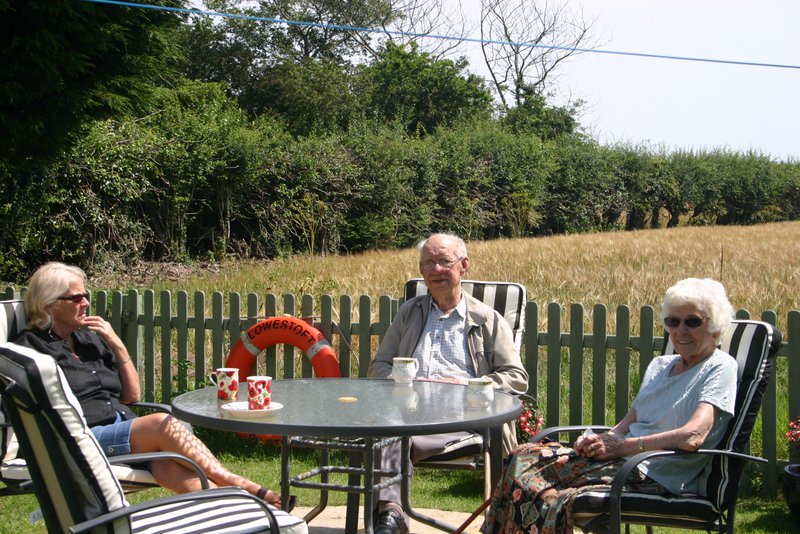 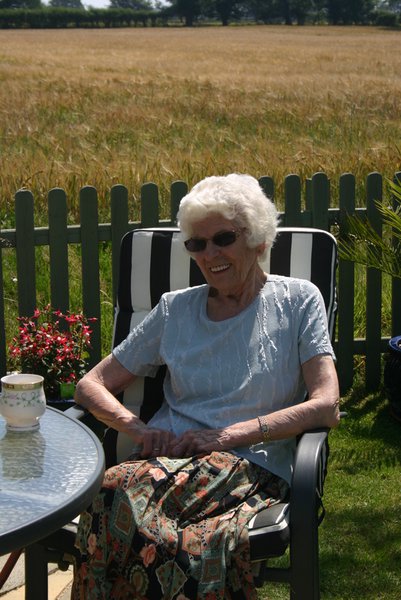 My Nanny the Angel
Nanny you were so special..
Your love knew no bounds,
The room took special warmth..
Whenever you were around,
You thought I cute, talented
maybe even wise...
But I know that was because,
You saw through loving eyes.
Everyday with you was precious,
I am grateful for our time...
Of all the nannys in the world,
I'm so thankful you were mine...
I LOVE AND MISS YOU xx

You have left so many happy memories for us to cherish. Much love Kelly, Gary and family. x


First of all, on behalf of Jean’s family, I would like to take the opportunity of thanking you all for attending today. Also to say how much we appreciate the many expressions of sympathy received since she passed away, in the form of cards, letters, flowers and on-line messages. There have been many kind words said and written about her and it does give comfort at a difficult time.
Jean’s life will be recalled in detail during the Reverend Payne’s address. But, as a family, we wanted to provide a few of our own happy memories of her life with us. I'm sure all of you have your own memories of Jean too.

Jean will be remembered as a wife and companions to Tony, with over 50 years of marriage together.

Jean will be remembered as Mum to Pam and to me (and also mother-in-law to Rick and Jane). When Pam and I were young, she was always there for us both, but she always seemed to be busy doing something, either at home, in the village or at work. She was generous in so many ways - with her time, money and anything else she could help with, whether that was baby-sitting, letting us use the car, even after I damaged a couple of them.

Jean will be remembered as a Nanny (to Darren, Craig, Jack, Megan and Jess) and Great-Nanny (to Liam and Madison).
She loved being a Nanny. When the grand-children were young, and both she and Tony had retired, they could spend more time with them (especially, Darren, Craig and Jack).
She would often have them over to sleep at Mill Lane. Darren can remember when he stayed with Nanny and Granddad at Mill Lane after Craig was born. Unknown to them, he had changed the number on the milk dial. She was really surprised to see that 10 pints had been delivered the next morning.
There would be many days out with the grand-children. Tuesday’s in the early 1990’s were always Jack’s day, as she would collect him from play-school or nursery at lunch-time and take him back home to Wrentham. After lunch her and Tony would take him out somewhere in the afternoon, often to Covehithe, then back to Mill Lane for tea before returning him home in the evening. She loved those times and still recalled them whenever she saw him.
The grand-children loved visiting Nanny and Granddad in Wrentham.
If they got also invited to tea, it was a treat as she would often cook them "the best chips ever", as Megan and Jess put it. There would be many visits where, after tea, the evenings would be spent playing cards. If it was a summer-time visit, it would be out in the garden playing 'catch' with several tennis balls at the same time. It would normally end up with them trying to confuse Nanny and hit her (not hard) on the head with a tennis ball as she would be telling them to “Mind the greenhouse”.
As the grand-children got older, Jean continued to be proud of their achievements.
• At school.
• Seeing them learning to drive and getting jobs;
• Darren and Lindsey becoming parents with Liam and Madison and seeing them Christened;
• Craig’s singing – finally got to see him perform with his group at Darren’s birthday party in May;
• Seeing Jess do well at school and planning to go to university;
• In 2011, coming to see Craig and Jack play football at Carrow Road.

Then, of course, with it being so close to Christmas, we've remembered past Christmases spent with Jean. When Pam and I were young children, Christmas mornings would be Mum cooking the dinner and aunts, uncles and cousins coming round with presents and staying for a drink. Mum would enjoy the odd glass of whisky and ginger ale. Later on, she would often put on a big spread for tea and invite family and friends from the village round.
In more recent times, her and Tony would regularly stay with Pam and Rick over Christmas - something that she always looked forward to (and never wanted to go home). Craig recalls one Christmas Eve when Nanny was staying. He came home late after enjoying the festivities a little too much and went straight to bed. Someone came into his bedroom and kissed him on the forehead. As he was, shall we say, 'a little confused', he thought maybe he might have got lucky but, sadly for him, it was just Nanny who, worried about him, had stayed up and was relieved to see him home again. There would be games in the evening. One year, Megan and Jess were trying to teach Nanny the ten-pin bowling game on the Wii. "Remember Nanny, its 'B-Back-Release'!". She never did quite get the hang of it, but gave us and herself a lot of laughs nevertheless.

Other recollections about Jean that made us smile and be proud.
• Pam remembers day trips to London with friends and works colleagues, when Mum would go along too. She always enjoyed the journey, the meal and the shows. One time, according to Pam, she even got chatted up on the train home!
• From Pam's friends who, when on coach trips to London would have to remember to wave to Jean on the way through Wrentham as they passed the bungalow at Walker Gardens. She would have got up at a ridiculously early hour just to do this.
• From Karen, her niece, who remembers when she was a little girl the excitement of visiting Auntie Jean and Uncle Tony at Wrentham and the joy of Auntie Jean allowing her to help with getting tea ready, including squirting cream cheese into celery sticks!
• From Sally, the daughter of Jean’s good friend Pauline, who recalled the kindness shown by Jean to her family before they emigrated to South Africa in 1963.
• From John Allport who recalls when he and his wife moved to Wrentham in the 1990’s and how Jean and Dolly, being active in the church at the time, welcomed them and became good friends.

So, although Jean has now gone, she has left everyone with many good memories – especially of times when she enjoyed better health – and it’s something that we will keep with us forever.

John and Barbara donated £20 in memory of Jean

A donation for EACH in memory of Jean.

From John and Barbara (Marram Green).

Jean was my Godmother and, although we didn't meet very often once I had grown up and flown the nest, she was and always will be someone who I had special affection for. She was a kind, generous and loving lady. 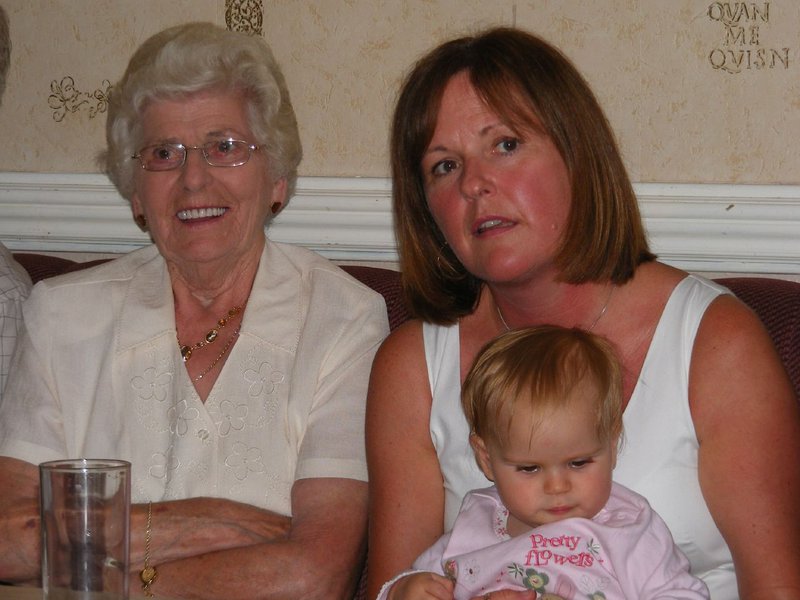 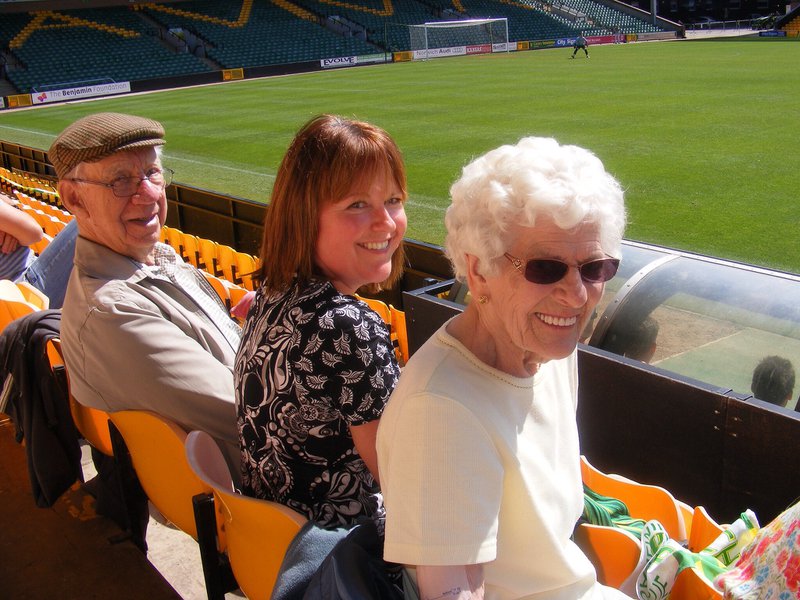 From Mona & family
And Betty

What an amazing lady you will be greatly missed Auntie Jean, I have lovely memories of going round yours and Uncle Tony's for tea and having fish fingers and chips. I hope you will have lots of fun in heaven with Nanny Dolly all our love Donna and family xxxx

Such a lovely lady remember the times we went on holiday with pam and rik and had to wave to jean when we went past her house also such a laugh when we went to london bless her R.I.P Jean xx

Jenny and Peter Jones donated in memory of Jean

Remembering a lady whose personality lit up the lives of all who met her. 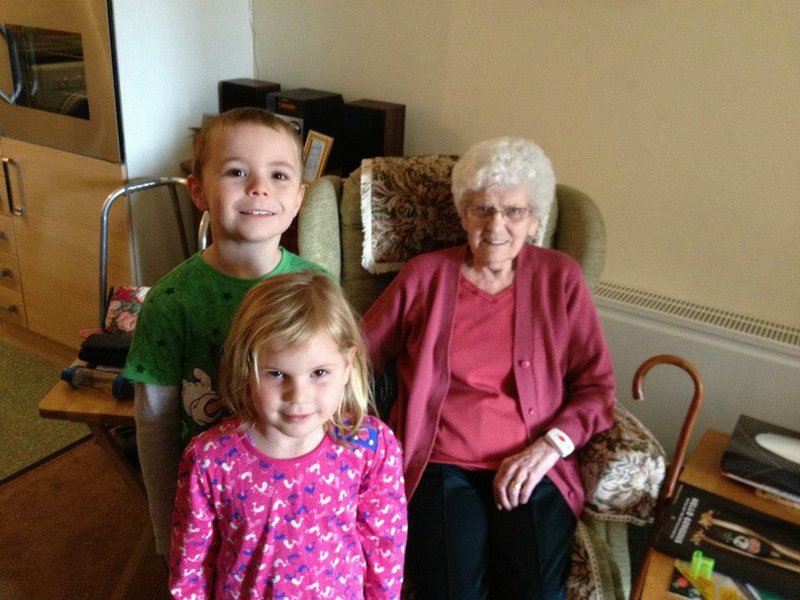 So very sorry to hear of Jean's passing - My slightly odd but wonderful memory of my Auntie Jean is celery and primula cream cheese - as a little girl I used to get stupidly excited about visiting Uncle Tony and Aunty Jean at the house on Mill Lane in Wrentham. Uncle Tony would lift me up, upside-down, by my ankles ( In my mind this made him completely incredible !) and Aunty Jean would let me help make tea , including the very responsible ( and quite tricky for a 4-5 year old ) task of squirting cream cheese very carefully along a stick of celery - this was the complete hi light of a visit and it still makes me smile in the super market when I see primula or celery .

She was an amazing lady , who saw incredible changes in her lifetime and leaves behind a huge number of family and friends , each with their own special memories of her .

I am sorry that I won't make it to the funeral but will have my own quiet moment thinking of you all ( and may even make some celery and primula sticks in her memory!) 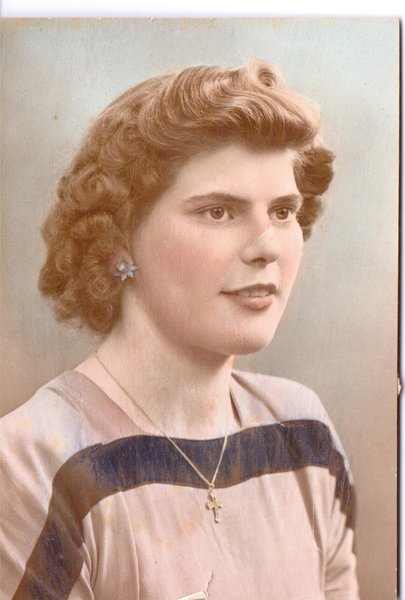 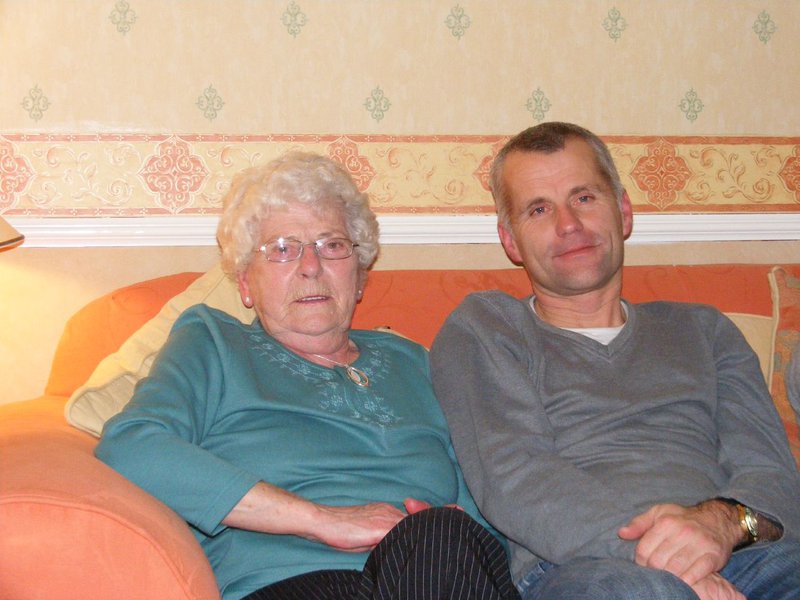 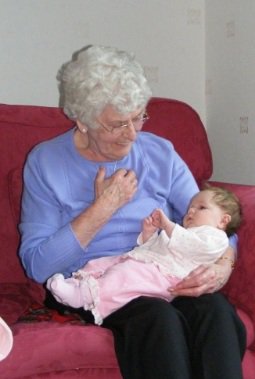 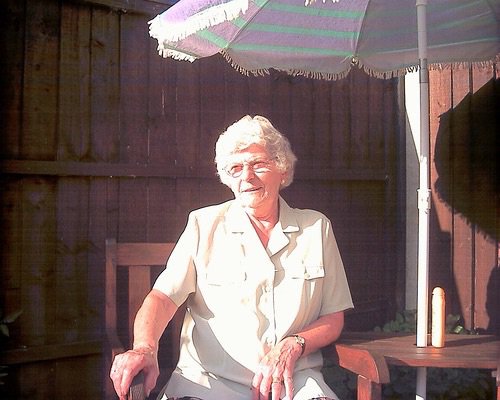