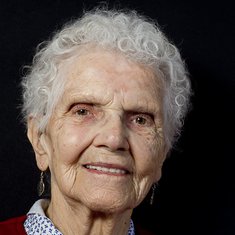 A Tribute by Stan

Mum was born way back on 10th June 1915 in a little mining village in Durham, the youngest of 6 children, she had 3 brothers and 2 sisters. Her two sisters went into service in London and mum joined them in 1930 working at various houses until war broke out in 1939 when she joined the NAFFI. After the war mum met dad, who was a friend of a friend. When asked what she thought of him she said “ ken rather liked me but I didn’t think much of him, he was too quiet and I was full of fun. He must have grown on her though as they celebrated their golden wedding anniversary in 1998, shortly before dad died

full of fun - that really sums mum up and a part of her philosophy of life, the other being always treat others as you would wish to be treated, both of which would explain the many friendships she formed during the 58 years she lived in New Addington and comments like these posted on facebook

"A lovely lady, we will all miss her greatly in Cedar House.A great inspiration to as all"

"Bless her I will miss her bombing around Cedar House. Always a smile for everyone."

"I remember Edith wen I worked as a S.H.O in cedar hse many yrs ago"

Yes she was outgoing and struck up conversations with anyone she met. I remember a couple of years ago when she was visiting us in Bournemouth, I had arranged to collect her from Church but was a bit late and was worried she might be wondering where I had got to – no problem – I found her, tea cup in hand, deep in conversation with another lady with whom she had been sitting during the service and it was quite difficult to drag her away

Mum had a big heart but was small in stature which meant that her feet didn’t touch the floor when she sat down in a comfy chair and the great grandchildren remember whenever she visited they would make sure her step was ready to rest her feet on.

They also recall the many creative gifts she bought them over the years, for example the cuddly easter rabbits made out of flannels but in particular the collection of singing and dancing character and animal toys. There was a

A bee singing bee my baby

father xmas on a motorbike singing rocking around the xmas tree

She loved getting out and about, holidays and day trips to the seaside. Millie remembers visiting with mum when she was at Hayling Island and getting rides on her walker seat. Mum also liked seeing shows at the Fairfield Halls, going to the pop in, being a member at the Salvation Army, Baptist church and latterly here at St Edwards, playing darts and bingo to name a few but in recent years one of the highlights for her was the monthly teas arranged by Contact the Elderly.

Last year one of the teas was hosted by the fire brigade in Croydon and as Dee and I had arranged to visit her on that day, rather than miss out on the tea, she arranged for us to go too. The fire officers gave a tour of the station which included a demonstration with one of the hoses – some of the guests were invited to have a go and mum was at the front of the queue holding on to the hose with just a little help from the handsome fireman as water came out at high pressure. The local paper was there and mums picture was in the advertiser the next week. Guests were also given the opportunity to slide down the pole…………..than goodness mum declined to do that

She also embraced some of the new technology and had a digital camera and a mobile phone, although with the latter she was often pressing the wrong button and muting the volume and couldn’t figure how to get it back

As I said mum loved to get out and about, but with her advancing age walking any distance became more difficult so a few years ago she bought herself a mobility scooter and I know many of you will have seen around the estate on it and probably run a mile for fear of being run over. Unfortunately she had little road sense – as David has commented on facebook

"Edith was well known around New Addington, Nearly 100 years old, she was often seen riding her mobility scooter,she used to scare me as she would cross King Henrys Drive with speeding traffic"

So after a life spanning almost a century she is no longer with us, quite a shock for us but perhaps not unexpected. I am just thankful that Dee and I had come up to see her the previous day, we took her to lunch at The White Bear where she ate everything that was put in front of her and said she had a lovely day

So Rest in Peace mum – We love and miss you

A lovely, gentle lady, much loved and respected by family and friends. May she rest in peace.
Jeff & Margaret 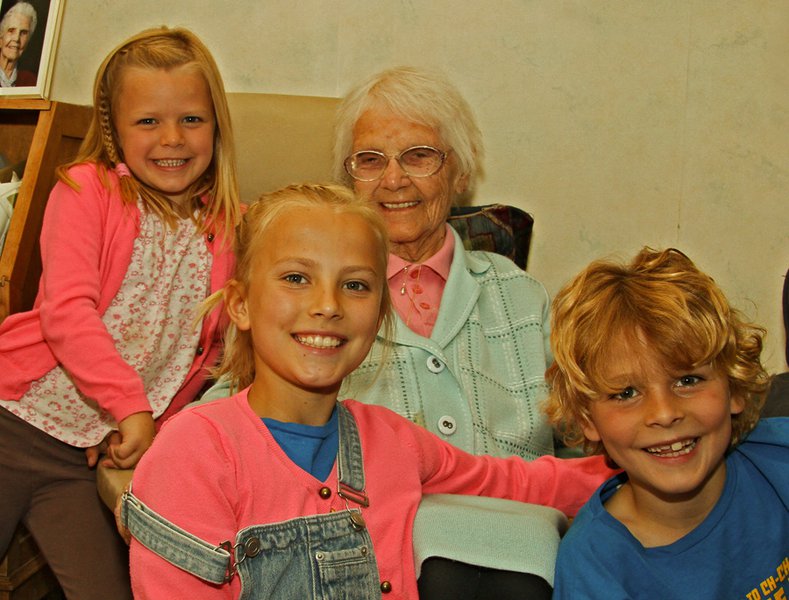 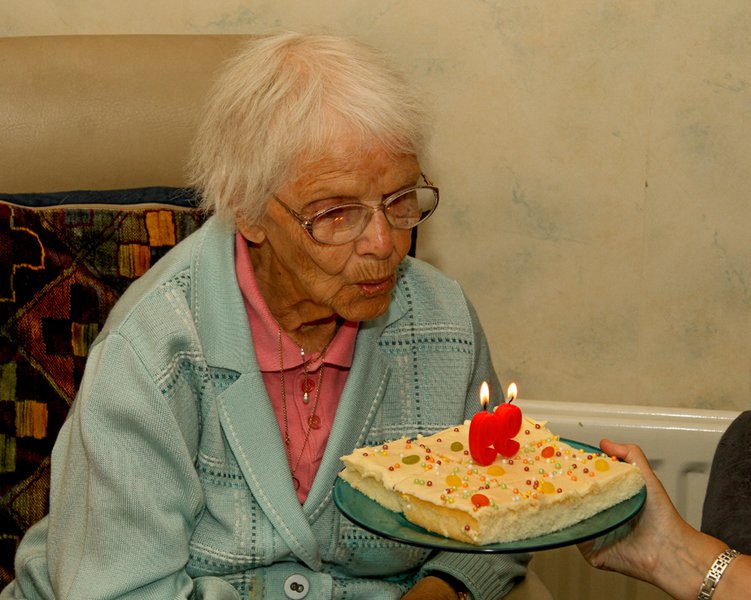 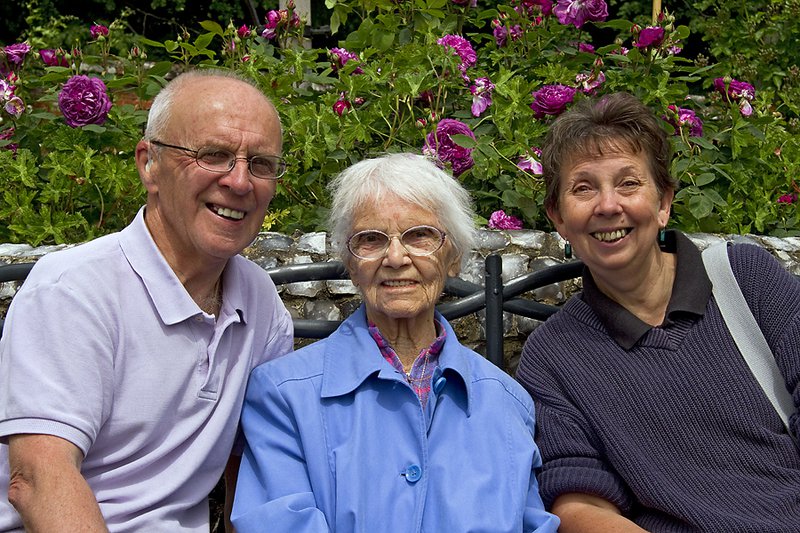 We in the Croydon Contact the Elderly group have so many wonderful memories of Edith from the many years she was a member of our group. We shall miss her a great deal. God Bless xx 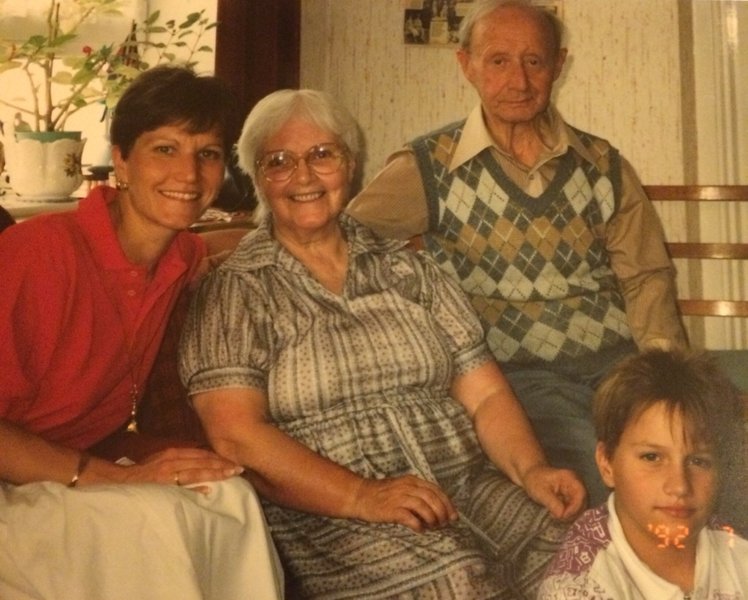 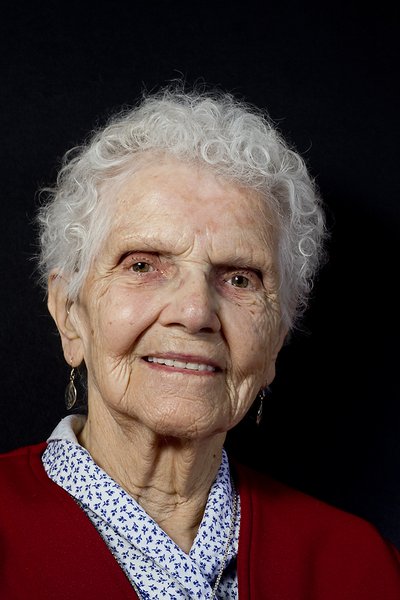