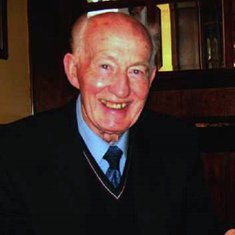 Passed away peacefully in the Nightingale Macmillan Unit, Royal Derby Hospital on 19th October 2014 aged 86 years with his family by his side.

Beloved Husband of Glenys. Dearly loved Dad of Yvonne and Susan and Father-in-law to Jim and Neil. Adored Grandad of James & Heidi and Michael & Rebecca and Great Grandad to Elsie Florence. Brother to Gladys and the late Cyril.

The funeral service for Robert will be held on Friday 31st October at 11.15am in the Carnarvon Chapel, Bretby Crematorium.

Thank you all for coming today to join us in saying a fond farewell to Robert.

Whenever Robert met any of his many friends he would break into a smile that would light up the whole room. Whether it was “Hello Mr Harrison” from a friendly neighbour, or “Hello Robert” from friends and relatives or even “Hey up Bob” from a workmate - he loved meeting people.
And he loved a good chat, reminiscing and repeating much-loved stories...

He was born on 22nd May 1928 and lived in Thorn Street, Woodville. He would often talk about enjoying his childhood in Woodville and happy times with his brother Cyril and his sister Gladys.
The stories he told were good memories of a happy childhood. He kept pigeons, two of his favourites being called Gerald and Wibby. In the garden they had pigs and ducks and he enjoyed helping his “Mam” look after their bantams. He started to learn the piano at the age of eleven and he played most nights at home; Moonlight and Roses was one of the tunes he used to play.

Robert followed his brother Cyril to the coal mines, working as a mechanical engineer at Granville Colliery. While working there he went to Sheffield University where he gained his qualification in Engineering. Work at the mine was hard but his memories were of the good times, enjoying the friendships and the banter; and the pint after work that didn’t touch the sides.

From a young boy Robert loved playing football; he played for Newhall and Overseal, and also represented the National Coalboard Seniors for which he won a trophy in 1954. His love of football carried on over the years, taking both his daughters to the Baseball ground to see Derby play, watching his grandsons play, and watching Derby on the telly with James. He also played cricket and was keen on darts, winning a competition at Pontins that lead to him staying longer as he was doing so well.

Robert met Glenys at the Rink in Swadlincote in 1946, and they danced through life for the next 65 years. Dancing was their hobby together and they made many good friends through dancing. They regularly danced at Gresley Old Hall; enjoyed dancing holidays with their friends; and he loved to practice the new dances at home.

After working at the mine Robert spent a short time working as a mechanic for Thomas Lowe, the builders in Burton. In 1968 he moved on to Ind Coope Burton Brewery to work as a brewery engineer until he retired. He made many good friends and enjoyed the work. His daughter Susan followed him into the Brewery as did his grandson Michael. He was proud that some of the young lads he taught as apprentices, went on years later to teach Michael during his apprenticeship, and Michael was well looked-after - such was the respect for Bob Harrison at the Brewery.

Family life at the bungalow and time in the garden gave great joy to Robert. He helped Yvonne and Susan enjoy the simple things such as climbing ladders to pick the apples and pears from the trees, growing beans at the bottom of the garden and tending tomatoes in his greenhouse. He enjoyed them riding their bikes, playing in the paddling pool, playing on the slide that arrived one Christmas complete with soot on it - from when it came down the chimney – and especially playing on the swing. He loved having a swing in the garden and any child (or adult) visiting would be encouraged to “have a go”. He also loved his cars, and on Sundays he would take his family out for a run to Matlock Bath, or Tamworth, or just up and down the Cup-and-Saucer hills.

Robert always enjoyed his holidays whether it was a spectacular trip to America with Yvonne or a holiday at the Seaside with his grandsons. They went to Paignton every year for about 16 years, he was a brilliant grandad playing football and cricket on the beach, paddling and swimming in the sea, playing crazy golf or just sitting with James and Michael enjoying a whippy ice cream.

As well as holidays, Robert also enjoyed special occasions. He liked playing games, having fun, being together as a family. Whether it was a birthday, an anniversary, or Christmas, his enjoyment of the occasion was infectious and made everyone else enjoy it all the more. With folks gathered around, presents and food, whether it was a meal at a restaurant or his special favourite: a big turkey with all the trimmings at Christmas, Robert loved it.

Recently we had James and Heidi’s wedding which he talked about long before the wedding and long after, it was a special day and he kept remembering different parts of the day and looking at the photos and keeping the enjoyment of that day fresh in all our memories.

When Michael and Rebecca were expecting their baby girl, he was really excited for them and it was wonderful that he had the chance to meet his beautiful great granddaughter Elsie Florence whilst he was still at home. He told Michael and Rebecca to look after her and make sure she has a garden to play in with a swing and a slide.

Wherever Robert went and whatever he did he always loved to come home. When he was sitting on his bench looking at the garden he had created, or when he was up the garden planting beans, or pottering in the greenhouse, or chatting to James and Michael, he would have all the simple things he wanted. He would turn and say “it’s paradise”, “I’m in paradise”.

So thank you Robert for all the wonderful memories, all the joy, and happiness, and laughter. Go with our best wishes, have a drink with Cyril, and dance with the angels. It has been a pleasure to know you, thank you for lighting up our lives.

You did a great job, well done. 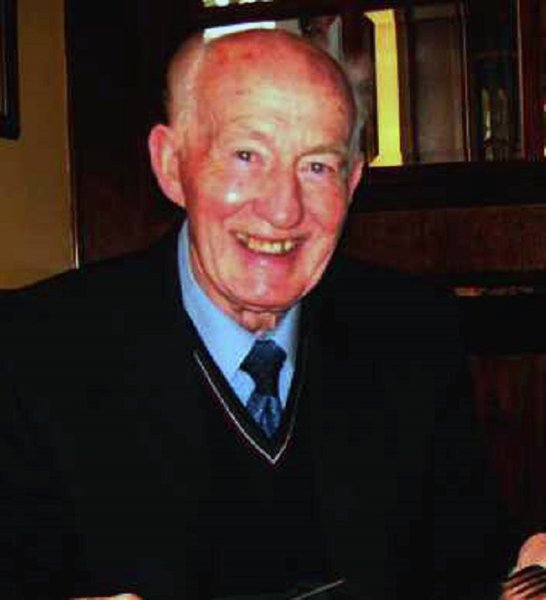