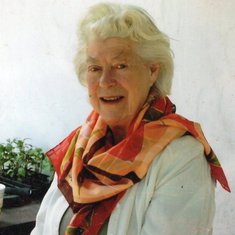 Aged 94, at home on 18th January 2016. Beloved wife of Roger Paine, much loved mother, grandmother and great grandmother. Funeral service will be held at the North Devon Crematorium on Friday 29th January at 10.20am. A Celebration Service will be held at St Edmund’s Church, Dolton at 4.00pm. Enquiries to Braddicks & Sherborne Funeral Directors, No 1 Abbotsham Road, Bideford,EX39 3AF (01237) 477222.

Rest in peace Bobbie - we will miss you.

We will miss you Bobbie - Marian and John xx

In memory of a remarkable woman - I chose this colour to represent her vibrancy in life - and her love of all that surrounded her, especially her family and that includes the 4 legged ones!

This is the Eulogy Tim wrote and Mark read so beautifully yesterday
There is a very well known Middle Eastern imprecation
"May you live in interesting times"
That it is a curse is something to which our Mother would have taken strong exception. She reveled in interesting times and in her 94 years she crammed much that was of great interest!
The intervening years between aspiring art student to a hyper active retirement in this quiet corner of Devon have been anything but dreary.
Mother's chosen career path was clear, to complete art college and become an illustrator or children's books. However, in 1939 Mr. Hitler intervened and altered matters somewhat. She promptly volunteered and became an officer in the WAAF posted to become a radar specialist. She was offered promotion, but refused it as she wanted to be in the coastal radar stations where, she felt, she was needed the most. The "few" referred not only the fighter pilots, but to every branch of the R.A.F technicians who got the fighters into the air, or the radar operators who directed them to their targets,
Following the War life became a great deal more out of the ordinary. Bride and Mother of two in Sussex, wife, secretary and hostess in Khartoum, chef in Devon, and again in Malta, Andorra and South Africa. After South Africa, partnership in a delicatessen in London and then in a gift shop in Tintaghel before coming to live here in Doulton. Very interesting times.
Whatever she was doing and wherever on the globe that happened to be she was never happy with mediocrity, she plunged in giving 100 percent and more to the tasks at hand. Throughout her life she was driven by a principle that can be summed up in one word ..duty. Her duty to her land during the war years, her duty as a wife and support for Roger. Her duty as a hostess functions held for many influential people, political and commercial, in Khartoum. Leaving the Sudan in the early sixties Ma and Pa bought the Highwayman's Haunt, in Chudleigh. Mother now took on the duties of Chef de Cuisine. Between the two of them The Haunt was listed in the Good Food Guide, and written up in the Observer Magazine as one of the twenty best restaurants outside London. Not bad for an art student.
Authority came naturally to her. She always managed to command respect. She always managed to get the best from people, in the family this is referred to a fear! Her motto could easily have been "be reasonable, do it my way". She could be a trifle intimidating, never suffering fools at all. But if volunteer work needed people, Ma was in the front of the queue. She never turned away those in need of comfort or worthwhile council. She was incapable of unkindness or meanness of spirit. Her love and loyalty for her family was passionate. We all knew that we had her love and support, despite some rather extreme pressure upon her patience and benevolence during our formative years
One definition of love at first sight is:" a personal experience in which a person, feels an instant, extreme, and ultimately long-lasting romantic attraction for a stranger on the first sight of them. ". Ma and Pa met on a New Year’s Eve blind date. Their deep affection for one another never diminished They never fell out of love. It never faltered or waivered. Let us pray that they have now been re united.
We are a strange family. I know of few that are so close and dedicated to one another, and yet we choose to live scattered. We were, and are, united by our Mother, and our love for her.
"Adieu" means goodbye forever," au revoir", until we meet again. So Ma, "au revoir"
We all love you

Derek and Janet Bradshaw donated £25 in memory of Barbara

Bobbie will be sadly missed in Dolton and St Edmund's Church.

I was so lucky to have my great grandmother in my life and to have met her. I have beautiful necklaces that she gave to me that I wear almost every day. I will carry her with every day now. She had an amazing sense of humour and was also very stern which us young ones need every now and then.

She was supportive and proud of the career I have chosen.

Love you forever Ouma. Thank you for the time spent and for the special memories.

The first time I met Bobby was in April 1974 in Andorra. Bobby & Roger owned a restaurant there called Papillion. My first sight of Bobby was her cleaning the restaurant window with Vodka. I asked if it was indeed Vodka in the bottle. She gave me THAT stare and replied as if I should know the obvious, 'Of course! it's cheaper than Windolene here!!' 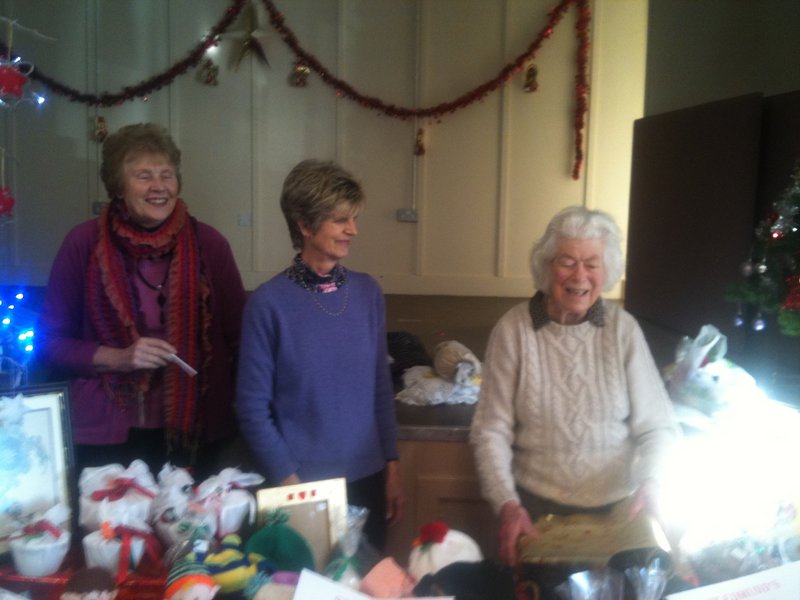 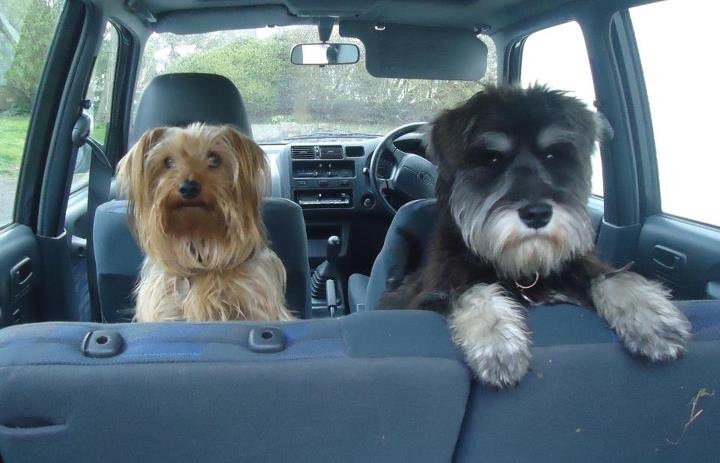 Mark and Janis paine donated £50 in memory of Barbara

Goodbye Ouma with my love Benedict

I am so privileged to have been able to have known you and spent time with you for as long as I have, you will always be one of the strongest women I know. You never forgot a birthday or Christmas, even right till the end. No words can express how amazing you were, you taught me so much in life. In the toughest times you were there.

Sending you much love and I know that you will be looking down on us and watching over us.

Gordon Roberts is attending the funeral and the reception 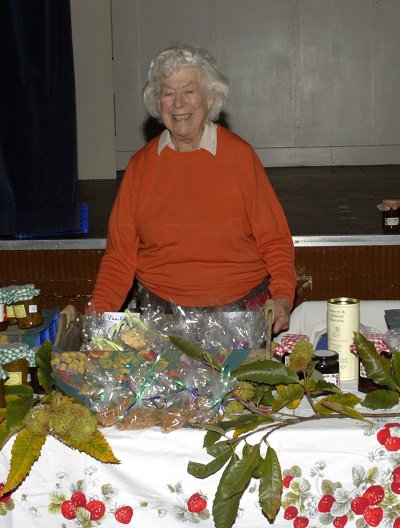 My love to you Jenny and all of your family at this sad time, may you find peace and comfort in your wonderful memories of your beloved Mum.

Paul and Hazel Donovan donated £50 in memory of Barbara 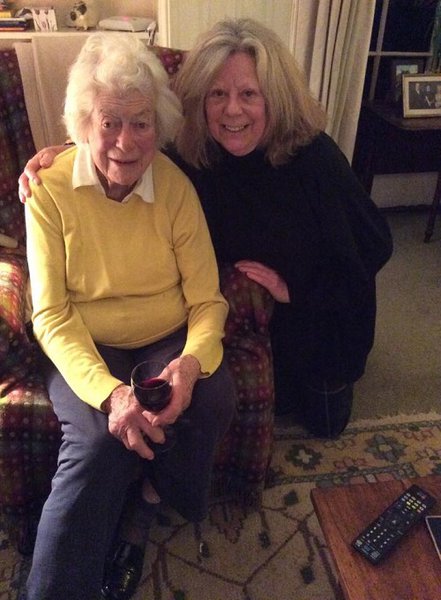 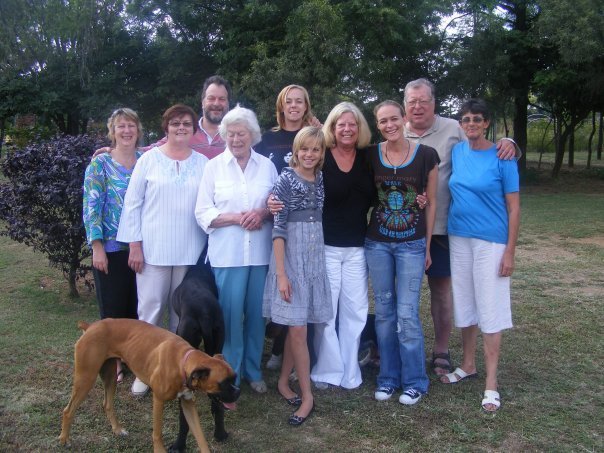 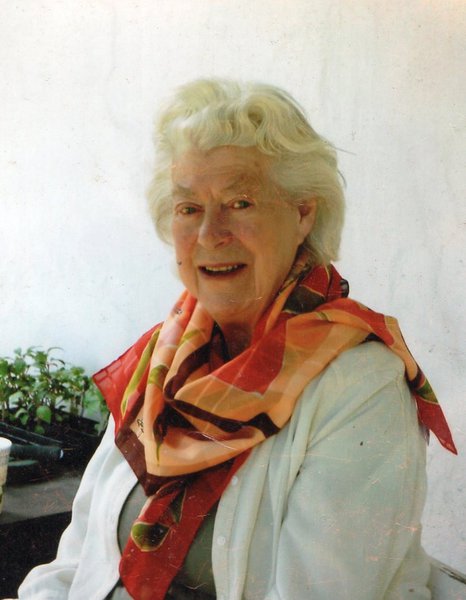 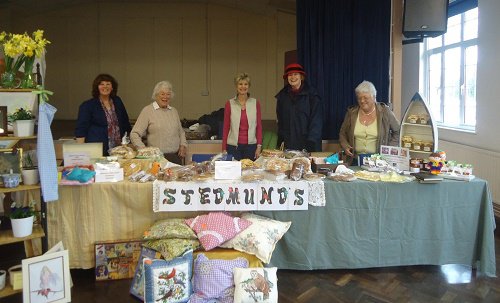 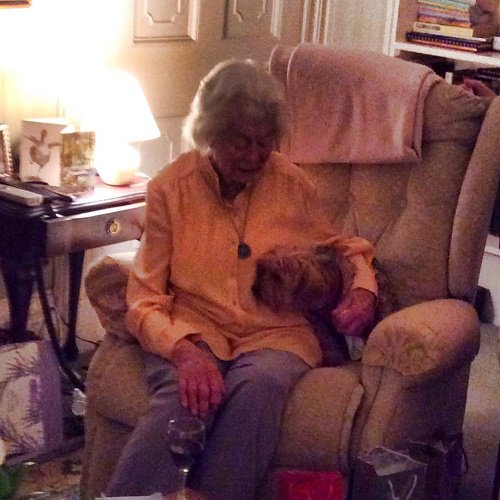 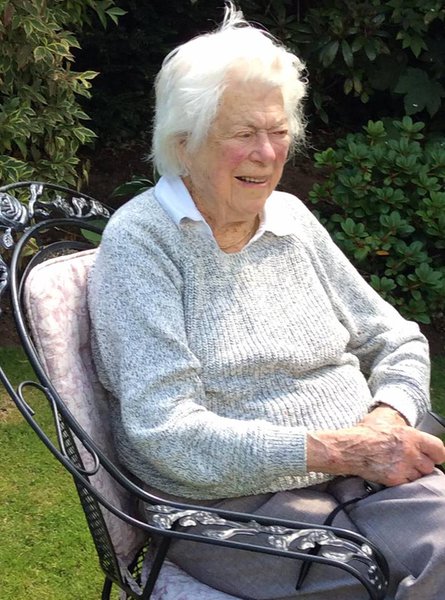 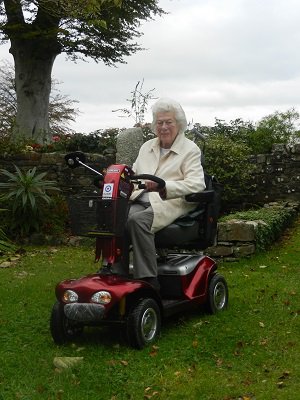 Mum on her much loved buggy from the RAF 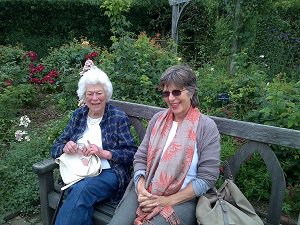 Mum at Rosemoor with Sally Ann 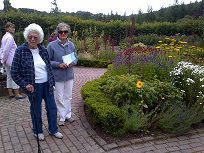 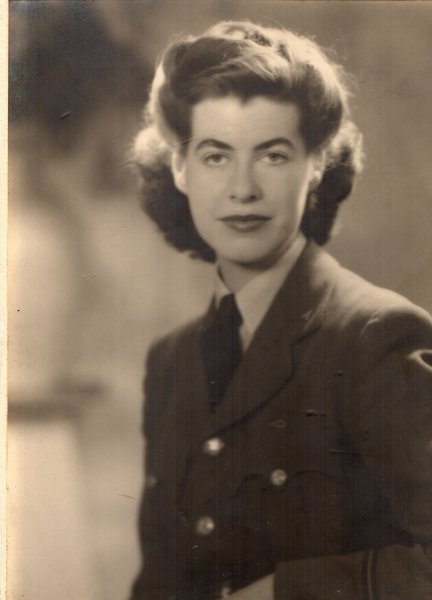