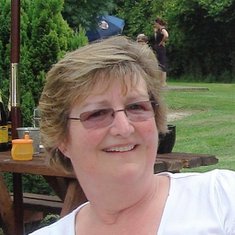 In loving memory of Janet (Jan) Cecily Sawyer who sadly passed away after her brave battle with cancer on 18th November 2015.
Jan was the beloved wife of Roger, loving mother to Laura and Karen, loving mother in law to Ben and much loved Nanna to Mollie, Emily, Harry and Charlie.
Born in London, Jan touched many lives and this continued when she moved with the family to Dilhorne in Staffordshire in 1987. Here she became the sub postmistress, and she and Roger reopened the village shop. Janet offered all a warm welcome and an ever glowing smile. She was an active member of the community, in particular through her involvement with Dilhorne Recreation Centre and its activities such as carnivals, functions and line dancing!
In 2001 the family relocated to Walkhampton in Devon where alongside Roger they became licensees in the village pub. Janet continued to offer a warm welcome and enjoyed the company of all who lived near and visited the pub. Their next move was to Ashwater where Janet continued to touch the lives of all who knew her, being part of the playgroup, village shop and surrounding community including the community steel band. Janet will be sadly missed by so very many.
Funeral to be held at St Peter Ad Vincula, Ashwater parish church on 30th November 2015 at 2pm. Donations to North Devon Hospice and St Peter Ad Vincula tower fund project in lieu of flowers.

Jan was a shining light to all who met her and will be greatly missed by so many.

Love you loads Auntie Janet, will always have lovely fun memories of you. I will always miss you. Goodnight god bless, love Sarah xxxx

I am sorry I couldn't be with you today Jan to say my goodbyes, but sitting here in Canada and thinking of all the wonderful times we had together as children. Rest in Peace my dear cousin, you've fought long and hard and now it's time to rest. Love Barbara xxxx

Even though I didn't know Janet for long I will still miss her and remember her with love and kindness. She always remembered my children's birthdays and my wedding anniversary and either sent a card or message. It was so kind of her to send a knitted cardigan when I had my daughter.
And it is with thanks to Facebook and mobiles that we were able to communicate. I'll always remember that she sent me a hand knitted hat and it was much appreciated.
She was a lovely woman who went to soon. Goodbye auntie Janet we will love and miss you always.
May God bless you. XXX

Thinking of you all today. Thank you for being a part of our happy, childhood memories. 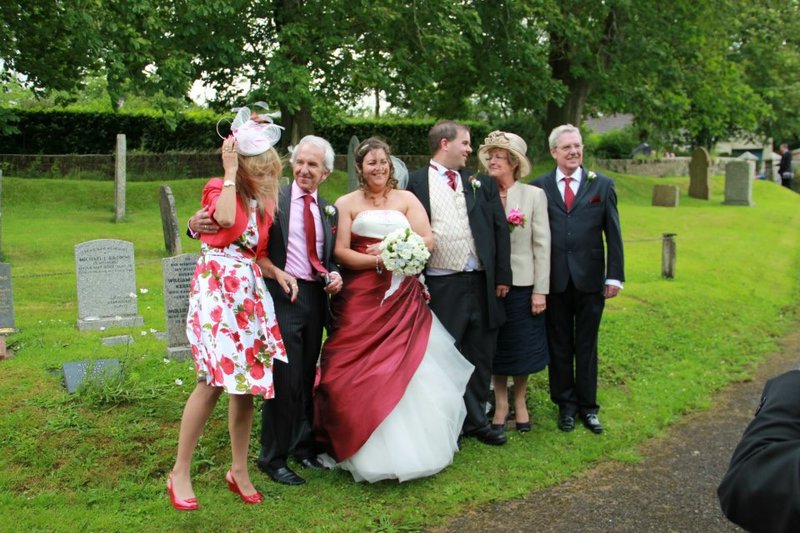 One of the nicest people you could ever wish to meet (and go to school with).

Although our time was brief my dear cousin Jan, the memory of our lovely few hours over lunch on the 29 April 2015, I will always hold dear. You were just as I expected, a warm, generous and cheerful person. My late father Fred would often speak very fondly of his much loved sister Cicely and the family tell me that you were just like her. Sleep peacefully dear Jan. Our love and thoughts to Roger, Laura, Karen and extended family. Thinking of you, from Felicity, Rod and all your family in Australia xoxo

In loving memory of a lady I was never fortunate enough to meet and who touched my life by my friendship with her daughter Laura.

Ta-ra 'nana Jan' you were such a ray of sunshine with a warm welcoming smile. You will missed very much to all whose lives you have touched and I'm blessed that we as a family were part of that however you will live on through your girls - dance amoung the stars and we'll listen out for the steel drums xxxx

Much love from us all to a lovely lady who when we moved to Ashwater school gave a beautiful smile to me and my girls. Karen and Ben did the same, with their beautiful family. Jan's smile will be missed by many. Rip beautiful kind caring lady xx

So very sorry to lose such a lovely lady. She was a gentle caring and thoughtful lady who battled bravely to the end with this horrible illness. We will always remember her lovely smile and kind heart. Our thoughts and prayers are with all of you. Love Tori, Rob, Hugo and Felix xxxx

Sleep well Jan. You will always be in our hearts and memories. Since moving to Spain, we didn't see each other as much as I would have liked. But I still think back at the times when I used to turn up in Dilhorne and everybody in the village new I was coming except Roger.
You are greatly missed and our (Joyce and I) give our best wishes and condolences to my big brother Roger and all the family.
RIP xxxxxxx

miss you will be in our thoughts always lovely lady second mum,u was always big part in my family xxxx

My thoughts are with the family and friends of Jan at this sad time. It has been many years since I saw any of the family but I have fond memories of them all. Karen and I were close friends throughout our time at Painsley - I was even attendant to her Carnival Queen - and was a regular visitor to the Sawyer Household. Jan never minded having another teenage girl in the house! She was always warm and welcoming and I am sure she will be missed by many for a very long time xx

Richard and Margaret Whatton is attending the funeral 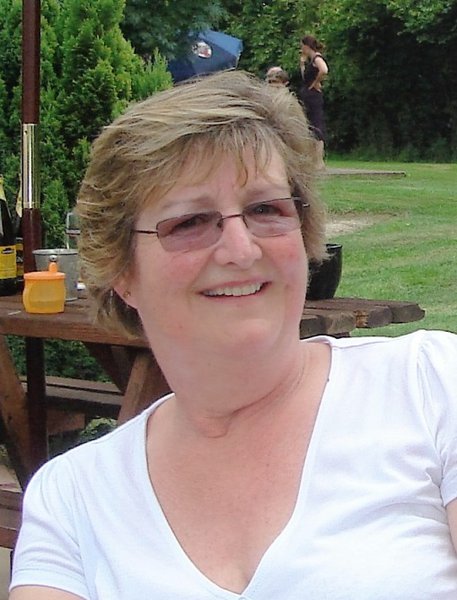 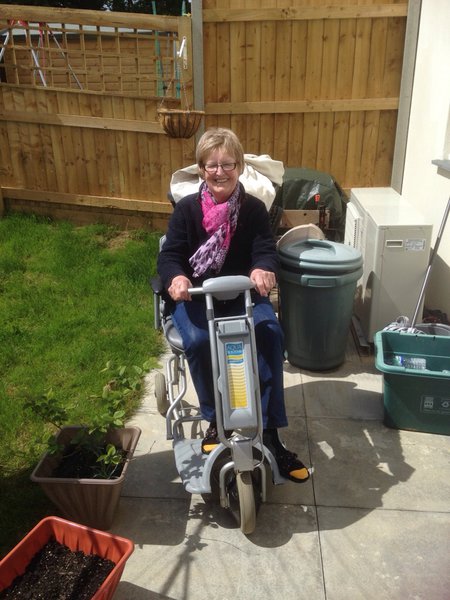 The last photo that Janet sent us. She was one of the loveliest people who ever walked this earth. 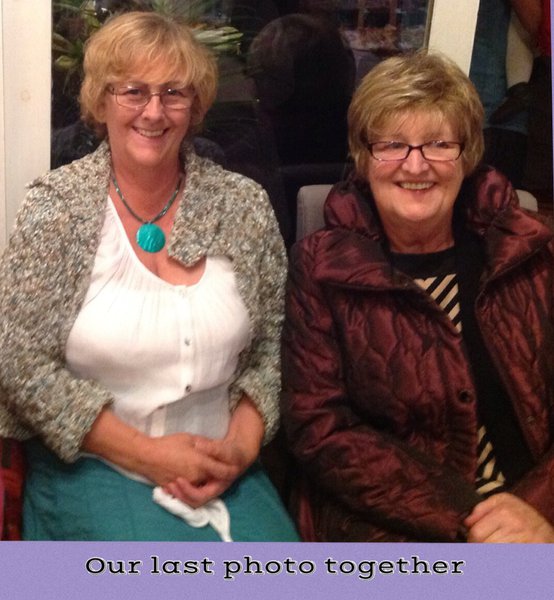 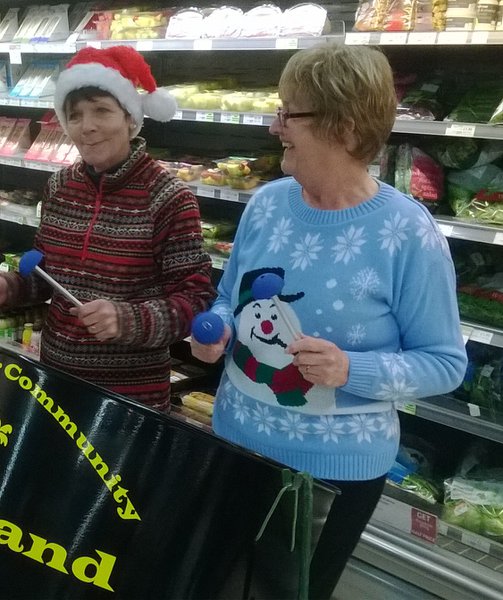 Jan and Renee playing in Waitrose. They always stood next to each other in the Steel Band. Jan has asked for the band to play at her funeral.