Exploring mourning in a fascinating showcase 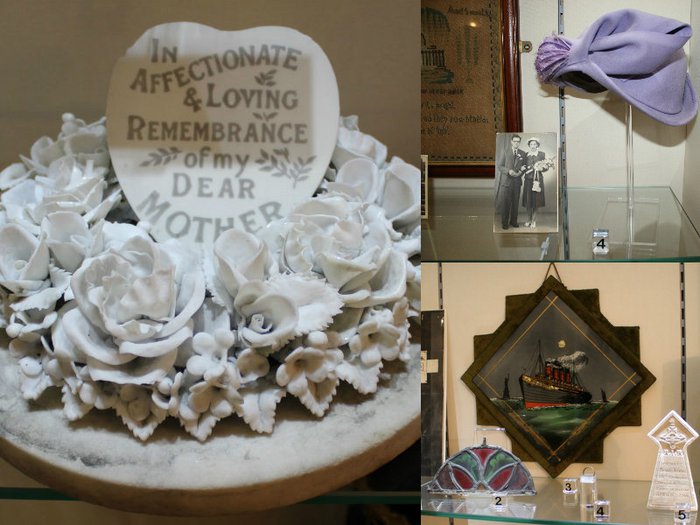 Nostalgic smells, voted by members of the public as the most evocative reminders of much-missed relatives, are an unusual feature of an exhibition with a focus on the ways we mourn.

The exhibition, at Abbey House Museum in Leeds features “smell boxes” for visitors to sniff, which include scents such as carbolic soap, tomato plants and tobacco smoke. 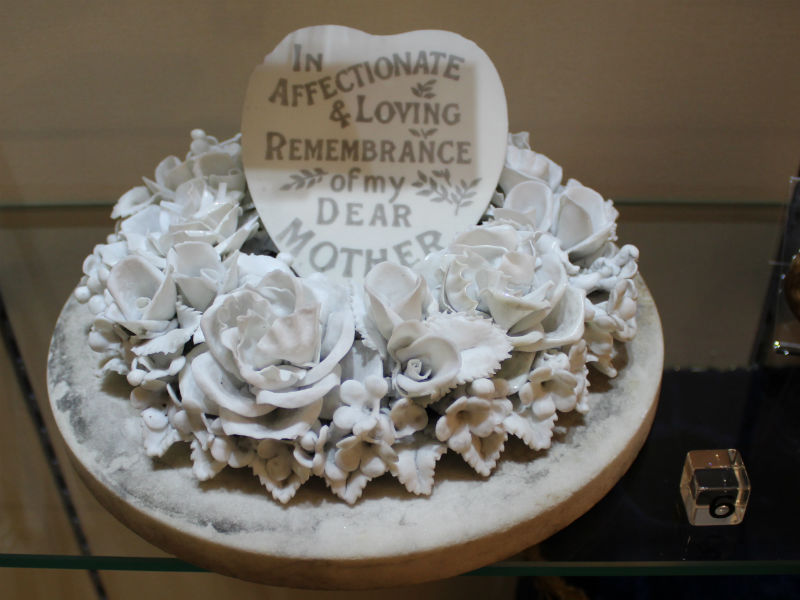 Manufactured mourning tributes such as this sentimental ceramic centrepiece, were popular in the 19th century

It’s part of a showcase called Remembrance which explores how we mourn people and keep their memory alive, as well as showcasing a rich historic and cultural diversity of mourning traditions.

Members of the public have also lent tokens of remembrance to the museum, that paint a fascinating picture of the ways we memorialise people we love. 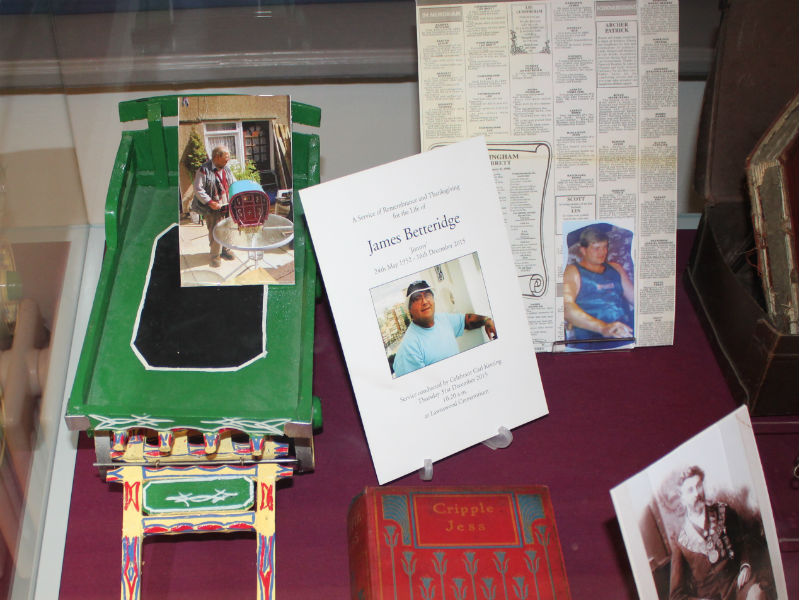 They have gone on display with vintage and antique objects of mourning from the museum archives, including Victorian embroidered samplers and seashells engraved with sentimental memorial inscriptions.

One particularly poignant item is a pair of child’s clogs, which date back to early 1900s when child mortality rates were still high.

“These were clearly never worn, but kept in memory of a young child who died,” says Patrick Bourne, assistant community curator at Abbey House. 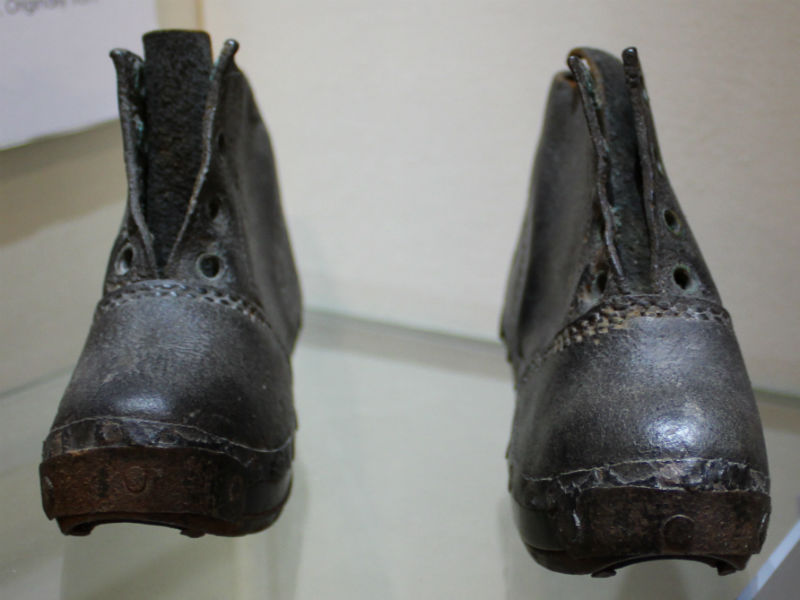 These clogs, unworn, were once hung by a grieving father on his child’s bedroom door

“The exhibition also includes memorial ‘Dead Man’s Penny’ medals, which were sent to every family who’d lost a son in the First World War.”

Remembrance reflects how the 1914 – 1918 war inspired a huge surge of interest in spiritualism and seances, as people desperately sought ways to cope with their terrible loss. 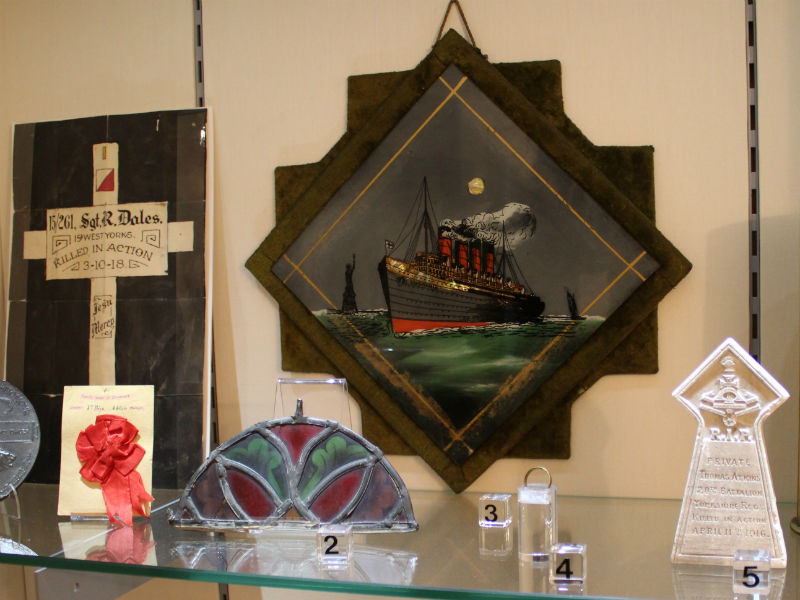 Grieving families began to treasure more personal mementos in the 20th century, like these, from the First World War

The objects on display also show how people’s everyday belongings came to replace bespoke and shop-bought tokens of mourning.

“There’s a hat belonging to a young woman, which was kept by her mother in her memory,” says Patrick. 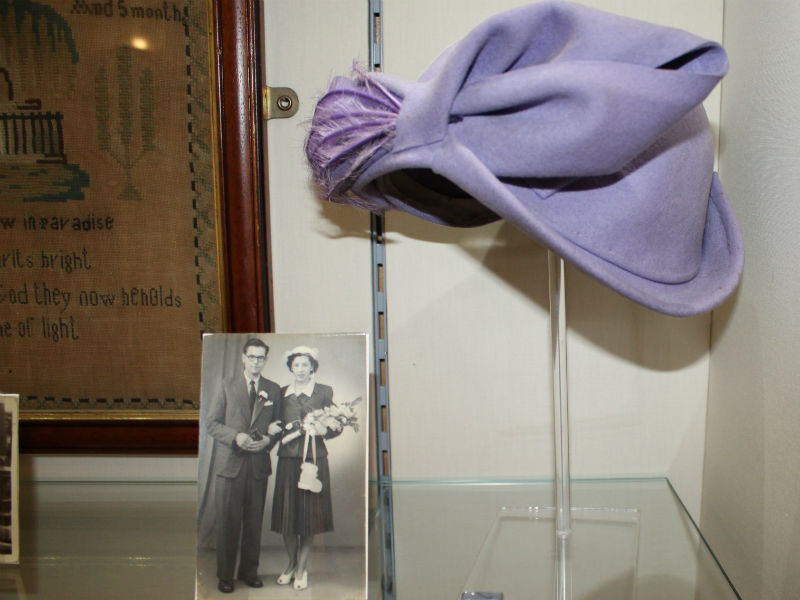 Today, he says, we remember our loved ones in many different ways.

“Many people set up a legacy page or online memorial, make photo albums or use cremation ashes to create a china cup or vinyl record.

“Any object – a book, a plant, or a piece of clothing – can remind us of the person we’ve lost.”

The Abbey House Museum exhibition, which runs until December 30 complements a ‘mourning warehouse’ and funeral parlour, which are permanent features of the museum’s Victorian street display. 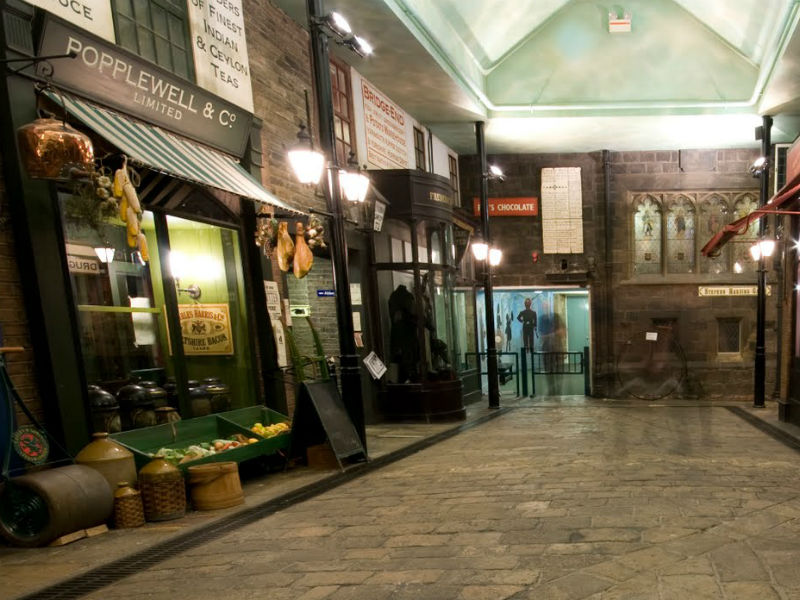 In Victorian Leeds, Frederick Forster’s was one such mourning warehouse, which sold a full range of mourning paraphernalia and widows’ weeds.

It also shows how rituals and colours of mourning clothes can differ according to culture and beliefs. The exhibition features Sikh funeral clothes, an embroidered Torah mantle and also shines a light on Roma Gypsy mourning customs. 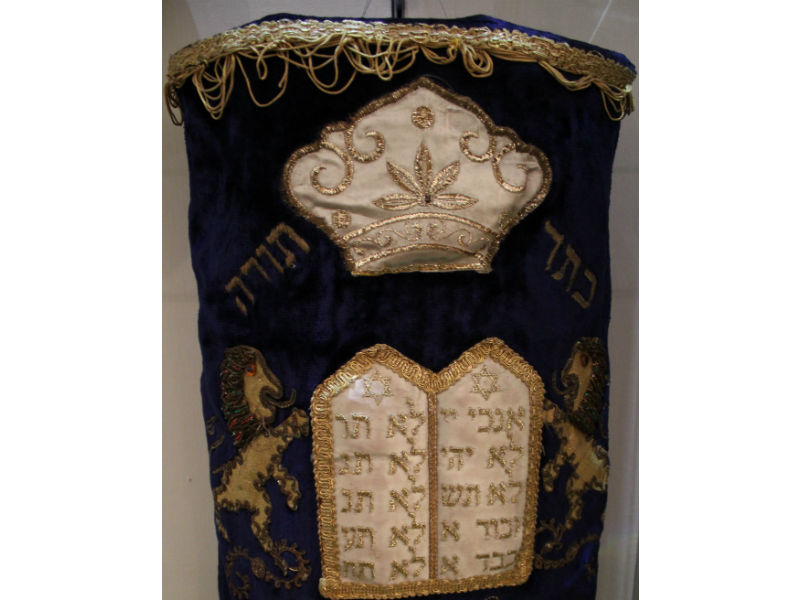 The Remembrance exhibition is part of a death-positive programme of events being held in Leeds through 2018, called Living With Dying.

Coordinated by Leeds University, it aims to encourage people to open up more about death.

Leeds University social historian Dr Laura King helped curate the museum exhibition and is a Living With Dying co-ordinator who’s behind wider research into the traditions and rituals of death and mourning.

“Death is still a bit of a taboo subject, but in many ways we’re more open than previous generations,” she says.

“Movements like Dying Matters and Death Cafes taking place across Britain are trying to encourage people to talk about it more.” 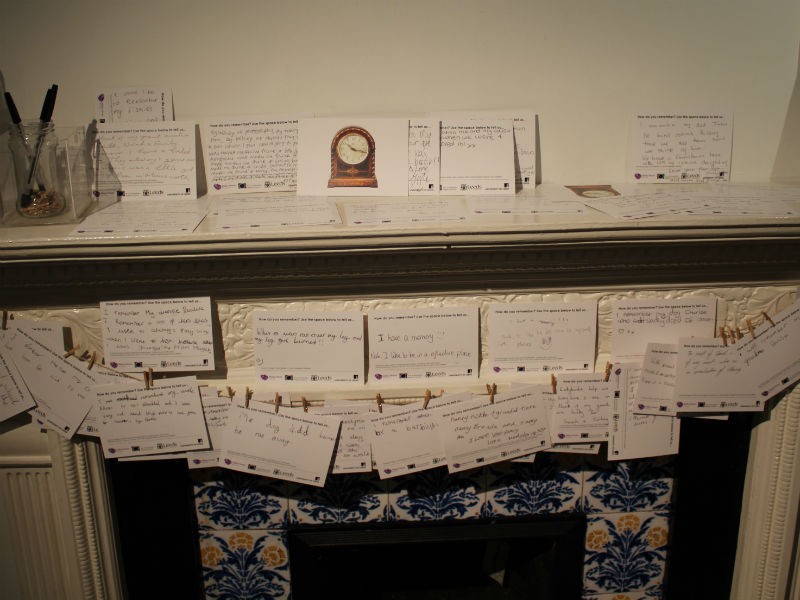 “We want to open up the conversation about mourning, and get people talking more about death and dying,” agrees Patrick Bourne.

“It’s also a way of using history to explore how people would like to be remembered in the future,” she adds.